Whether we realise it or not and wherever we live, we probably all have our own wild indicators that tell us the season's are changing. It might be the morning light creeping through the curtains into what was before a comfortable darkness. It could equally be a sound.

For me, it's my local corn buntings that herald the return of spring. In winter, they are fleeting specks in the muddy fields, blending cryptically into hedgerows and stubble, only spilling into my consciousness with sudden flight and soft, rippling calls.

But come February they have grown bolder and by the middle of the month the first males are seeking out perches from which their rattling song can transmit. Tucked somewhere about them must be a small bag filled with shards and shiny fragments which they juggle and swing, because this is how I can best describe the song that stirs the fields from their wintry pallor. Unlike many other birds, my corn buntings are oddly confiding, happy to let an observer into their realm down to a few metres. The song draws me into a landscape that has changed significantly over the decades, the fields have expanded and people have retreated. But atop telegraph poles and hedgerows these birds still return at this time, perched like streaky sentinels, ever alert to the season's sneaking presence.


This is the second part of my Caribbean trip write up from January this year, a little later than planned but such is life. It all feels like a dream now.

Following Grenada our trail took us north via the Osprey ferry to Carriacou, a small and exceedingly relaxed island. Brown pelicans greeted us in the small harbour where royal terns flickered over the gentle surf. A quiet walk around the northern tip of the island that afternoon resulted in good views of a mangrove cuckoo in amongst the dense, wiry stands of coastal scrub. From a secluded beach, little more than a thread of white sand between the mangroves and the sea we could see the islands of Petit Martinique, Petit St Vincent and Union, the path between them dotted with reefs and several shipwrecks. The next afternoon, our own journey to Union Island was underway, albeit with a delay due to the small cargo vessel that agreed to take us suffering engine trouble. Eventually we set off, crossing the sea (and the international border between Grenada and St Vincent and the Grenadines) as the sun set, a deckhand using the trip to catch two barracuda from the back of the boat. 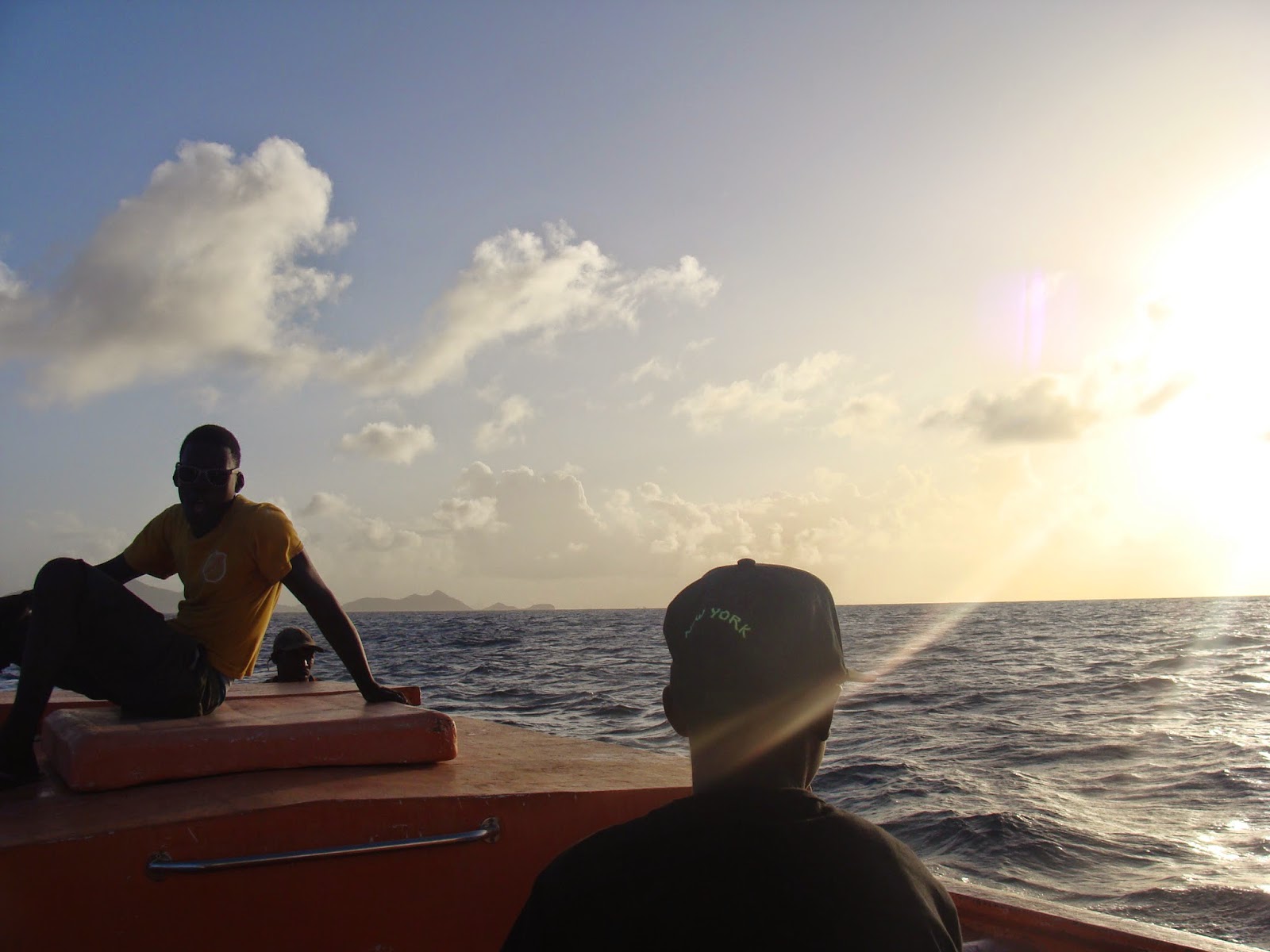 My short experience of Union was a pleasantly odd one. Arriving at dark and stateless from our delayed border crossing we were bundled into a van and off to the airfield's 'immigration department'. En route the driver proudly showed us his pet iguana, held in one hand while the other prodded the steering wheel. The island offered little in the way of birdwatching opportunities in our short stay but I was pleased to find the salt lake holding a number of blue-winged teals and best of all, four whimbrel that flushed out from a shallow edge. A flock of barn swallows swung wild circuits around the peak of a nearby hill.

Another ferry and another day, this time to Bequia, a stop for a few days to recharge literal and metaphorical batteries. Ultimately I thought the place was pretty dull but sometimes dull is ok and I still enjoyed our grandest accommodation of the trip in Port Elizabeth and one of its best meals at Sugar Reef cafe. A meandering Sunday walk to the latter also took us to the Old Hegg turtle sanctuary tucked away on a remote beach on the east coast. The owner was happy to show us around and tell his story, of how he fished and free dived for hawksbill turtles as a boy on the island before coming to realise their critical plight. "More fishermen...less fish" was his answer to the state of the seas on his island when I asked him. He was an admirably determined old sort, doing things his way. From a blustery headland we had a great views of an osprey riding the wind over the cliffs, while I was pleased to find a single American Oystercatcher on the beach in Industry Bay.


An epic day of travelling via ferry and planes took us on to Dominica but not before a whirlwind stop on St Vincent. With no time to head up in to the hills we used a few hours between connections in Kingstown's botanical gardens. Although I didn't realise it at the time, the gardens host a St Vincent Parrot reintroduction project with a number of birds visible in outdoor pens. Captive they may have been, but with their pale crown plumage they are perhaps the most stunning of the Antilles Amazona parrots.

Flying in to Dominica felt a bit like the opening scene of 'Jurassic Park', a lush, mountainous island emerging from the sea beneath heavy, grey skies. This impression stayed with me for much of our visit, such was the magnitude of forest that greeted every turn of the road. With three days on the cool Atlantic coast and two on the Caribbean side we were able to explore much of the island. There was good hiking around the village of Grand Fond where a steep trail led down to the Derniere Falls, a pretty, remote spot sheltered under a stunning canopy. I found Plumbeous Warbler here and luckily flushed a Ruddy Quail-Dove where the path twisted through some gardens at the forests edge. An enjoyable birthday whale-watching trip from just south of Roseau paid off with distant views of a group of Sperm whales, one obliging with the 'tail shot' that everyone wanted. I'd hoped for tropicbirds on the trip but birds were scarce, bar a Red-footed Booby that kept pace with the boat for a while and, more surprisingly, a single Pomarine Jaeger (ok, skua).

For our final day of the trip, we met Bertrand, aka 'Dr Birdy' - a passionate conservationist and Dominica's birding oracle. It was straight down to business and from Portsmouth we headed up to the Syndicate National Park principally in search of Dominica's rarest resident bird, Imperial Parrot. En route we worked some low-level coastal forest which gave up Red-legged Thrush and Caribbean Elaenia but dipped on Ringed Kingfisher. The key to finding Antillean Euphonia was apparently mistletoe trees and a stop on the road up to Syndicate eventually resulted in views of this colourful bird just as we were about to leave. After an extensive search for a Lesser Antillean Pewee which proved unusually elusive, we headed to the parrot watchpoint mid-afternoon. With views over a deep, forested valley and mountainside it offered the best chance of seeing the 'Sisserou' or a bird Bertrand described as "the ghost". Having been told we could wait several hours, it wasn't long before some Red-necked parrots appeared and then after fifteen minutes or so, with the guide looking the other way, I spotted a large parrot flying across the valley below us. Bertrand turned and shouted 'that's it!' pointing out the lack of yellow tips to the tail. Somehow, in a flash, he pinpointed its landing perch which led to some good scope views, it's deep, bruised facial plumage and large size evident. With the parrot in the preverbial bag we then enjoyed the remainder of the afternoon watching Lesser Antillean swifts plunge overhead as we explored more of the fertile, farmed valleys in the park.

And that was it, trip done bar an early morning flight the next day to Antigua for the international connection that evening. After a delayed arrival due to a plane not turning up ("probably gone somewhere else" - airport official) we had half a day on Antigua where I managed to jam in a few more bits. A walk along Dickenson Bay led me a short way inland to a massive brackish lake full of birds. Upwards of thirty black-necked stilts were present, plus many white-cheeked pintails, masses of egrets and my first genuine ruddy ducks! White-crowned pigeon was also present there to round off a decent 80 species for the trip.

A hugely memorable trip to a lovely part of the world.

3 Rivers Eco Lodge - a unique and commendable lodging on the Atlantic coast run by Jem  = a really helpful guy. There is a little bar there too serving the best homemade rum punch we had
Steve's Bar - Grand Fond. Steve is a cool guy and also provides meals at 3 Rivers
Whales
Cabritts - pretty interesting place, good for snakes and lizards. Visit the little gift shop just outside to learn about the local 'miracle oil' from an amazing guy who'll show you photos of his unlikely (and amazing) previous life
Bertrand 'Dr Birdy' can be reached via drbirdy2@cwdom.dm
If you need to go anywhere on Dominica ask for Winston (everyone knows Winston)