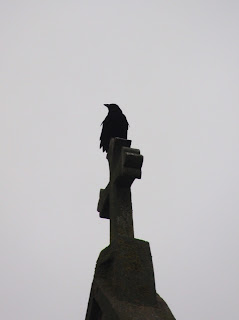 This solitary crow was perched upon the cross of a church on Lordship Lane in Dulwich this week.  A suitable picture to ponder on this All Hallow’s Eve don’t you think?
As the skies darken and the nights draw ever closer now is the time of year when birds of the corvid family (crows, magpies, ravens, jackdaws, rooks and jays) really come into their own. Watching a dark silhouette glide overhead or listening to the eerie sounds of a Carrion Crow it is easy to see why they often appear in mythology. Jane Struthers’ lovely book, ‘Red Sky at Night- the Book of Lost Countryside Wisdom’, offers one such example. She mentions that Magpies were once thought of as being the Devil in disguise hence the unlucky connotations of seeing one (if true then plenty of His minions are at work round here- or is that just the local council?) But worry not, apparently if you see a Magpie bad luck can be avoided if you greet it politely.
A quick look at some of the collective nouns that have evolved to describe groups of corvids (a murder of crows, an unkindness of ravens, a scold of jays) is further proof of the grip these birds have on the imagination. So tonight's the night to consider corvids- dark, powerful, intelligent...and mystical too.
Posted by Peter at 22:34 No comments:

Browsing in a high street record store recently I happened upon Edwyn Collin’s new album sitting proudly on a shelf. This fact itself was pleasing enough, however it was his splendid album cover art that really won me over. Adorning the sleeve are numerous sketches of birds; all well observed, simple and beautifully rendered (there’s a nice article about it here). It got me wondering where else birds make an appearance in musical cover art.


A quick rummage through the BirdPoem record vault turned up a few gems. So here we go...an overdue celebration of birds as portrayed on record covers*.
*one rule: to make it easier (and because it’s my favourite format) I’m just looking at seven inch singles. 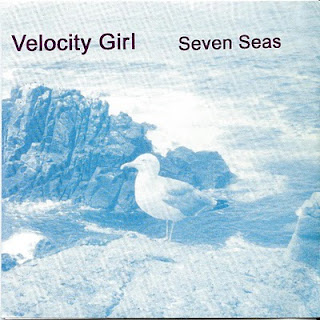 First up is this fine effort from Maryland’s Velocity Girl, unleashed by the good people at Heaven Records of Nottingham sometime around 1995 I imagine. The single delivers pleasant covers of Echo & the Bunnymen on side A and The Pastels on the flip but what makes it a bonafide hit round these parts is that handsome cover star! Larus argentatus unless I’m mistaken... the first Herring Gull to grace an indie pop record sleeve?! 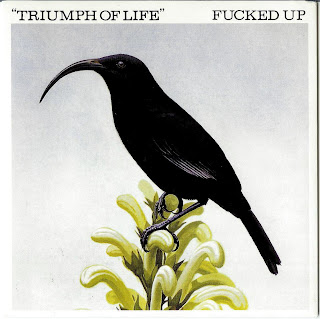 With their familiar aesthetic design, these guys’ record sleeves stand out a mile away. This one is no exception.  I like the way they’ve picked an image that perfectly illustrates the title of the single.  It brings to mind the beautiful work of artists such as John James Audubon who played an important role in documenting the evolution of birds. I have no idea what this specimen is or who the artist was but its impressive don’t you think?! 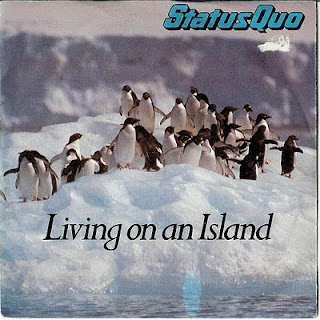 Some classic, good time rock n roll with plenty of birds on the cover to boot- what more could you ask for?! After some quick research I’d guess that the birds in question might be Adelie penguins (Pygoscelis adeliae). That iceberg they’re rocking out on suggests they’re an Antarctic species which narrows the field from 17 species worldwide to 6. They appear quite small in size and a white eye ring is visible on several birds. So there you have it...Status Quo, entertaining AND educational!
That's it for now but I'll be sure to keep digging. In the meantime, if you have any to add why not share them?
Posted by Peter at 23:45 1 comment:

Like many others, I spent much of Wednesday sitting in with the radio on, scanning the internet for news and opinion on the budget cuts. It may show my rookie colours but one of my first impressions of George Osborne’s speech was that things didn’t seem too bad. The tone was positive and the emphasis invariably on ‘the future’. It took me a moment or two to realise that this was a politician speaking and such tricks are part of their trade. With such a bewildering amount of information to sift through I reserved special interest for the plight of the environment sector.
As a nature lover I can’t help but worry about the state of the environment, so at a personal level it is perhaps the cuts dealt to the Department for Environment, Food and Rural Affairs (DEFRA) that hold most meaning. Unfortunately the general consensus seems to be that DEFRA took a particularly hard beating: an 8% cut in annual spending or a total of 29% by the end of the review period in 2014-15. This was apparently the third highest cut dealt to any department.
To me that seems quite a lot but I find it hard to comprehend just what these cuts really mean and when we will begin to see the effects. Clearly priorities will have to be reviewed and it’s likely that some deserving causes will suffer. In this much-heralded ‘Year of Biodiversity’ what will become of our nature reserves and environmental stewardship schemes for example? Juliette Jowit, writing for the Guardian, believes some biodiversity projects are a risk; before pointing out that the “UK spends only about 1/700th of public finance on the web of life which underpins our economy, health and society”. Way to go.
Although the cuts are significant, they’re the facts we have to work with. It’s an embarrassment sure, from supposedly the ‘greenest Government ever’, but it means there’s now an even greater responsibility placed in our hands to look after the environment.
Neat summary of what it all means here:

http://www.guardian.co.uk/environment/2010/oct/20/spending-review-environment?intcmp=122
Posted by Peter at 09:54 No comments:

It’s a big week for anyone with an interest in the environment- tomorrow the government announces the results of its Spending Review. As usual Mark Avery, the RSPB Conservation Director, has nailed what it’s all about on his fantastic blog:
http://community.rspb.org.uk/blogs/markavery/default.aspx
I’ll reserve judgement until the word is out but it’s hard not to feel a little apprehensive at the outcome.
Another topic in the news at the moment is DEFRA’s Natural Environment White Paper. I find myself confused by a lot of political terminology so I had to look up just what a ‘White Paper’ is. Basically it seems to be a document that sets out how the government intends to handle a current issue of debate with proposals and policies etc. So that seems pretty straightforward. Anyway, nature gets the treatment now and as part of the process the government has set up an online survey to research public opinion. So if you like rambling about the hills, swimming in the sea or just watching the birds in your garden, why not tell them what the environment means to you? You can bet I will be! Deadline is Saturday the 30th of October, here’s a link:
http://www.playyourpart4nature.org.uk/
Posted by Peter at 13:19 2 comments:

A fall of finches

No shortage of bird action round here in the last week or so, just very little time to write about it!
Chaffinches have been off my radar for a few months but made a sudden reappearance last Thursday (14th) in Hilly Fields Park. During a breezy mid-afternoon walk I spotted a small flock as they flew over the crest of the hill before taking shelter among the branches of some nearby trees. Those were soon followed by a half a dozen Greenfinches and Goldfinches. All of a sudden finches had taken over!
Now it’s certainly not unusual to see these three species here but their sudden appearance together was notable. Although populations remain in the UK all year round, certain birds migrate abroad in the spring to breed. As such, I think these may have been a mixed flock of migrating birds returning from breeding seasons in Europe and Scandinavia.
With Greenfinch populations (and to a lesser extent Chaffinch) thought to be at risk due to the effects of the trichomonosis disease, seeing good numbers is an encouraging sign. Curious about these sudden arrivals I checked out the BTO website and lo, one of the foremost entries highlighted the “impressive” nationwide movement of common species such as finches in the last week!
Posted by Peter at 00:08 No comments:

Name that Bird- Round 1!

To finish off my summer recap how about a quick round of ‘Name that Bird’? Scroll down for discussion!
﻿﻿﻿
﻿﻿﻿

I’d love to claim that photo no.1, showing a Red-rumped Swallow (left) and two Swifts, was snapped here in London but that’s not the case. While ‘common’ Swallows (Hirundo rustica) are a familiar sight around the UK in spring and summer, Red-rumped Swallows (Hirundo daurica) only occasionally turn up as rare spring migrants. This was taken much closer to their natural Mediterranean range- in a small village in central Portugal at the beginning of September. There was a lot of hirundine activity in the air at the time but it was only when this one landed that I was able to be sure Red-rumped Swallows were among them. The key identifier is its rufous collar and a similarly coloured rump that is visible in flight.
Same time, same place, I spotted bird no.2 furtively busying itself in a patch of scrub and olive trees. Female Blackcap was my instinctive reaction at distance but on closer inspection it’s less obvious. The brown head, pale breast and dark legs are characteristic of females but the darker colouration on the wing, coupled with the visible white patches perhaps less so? What do you think?!
Birds 3 and 4 come courtesy of my sister who spent the summer in Costa Rica. Knowing that the best way to appease her envious brother was with a few photos of birds that she happened to spot she delivered the goods here! But I have to confess I don’t know what they are yet- I’m still working my way through my ‘Birds of Britain and Europe’ book! Any guesses?
Posted by Peter at 14:12 4 comments: