Name that Bird - Round 3

BirdPoem is taking a break for a few weeks now, exciting changes are on the horizon; but in the mean time here are 3 new photos to ponder: 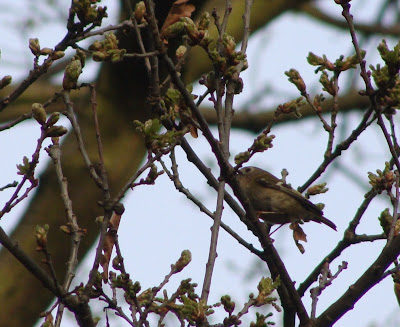 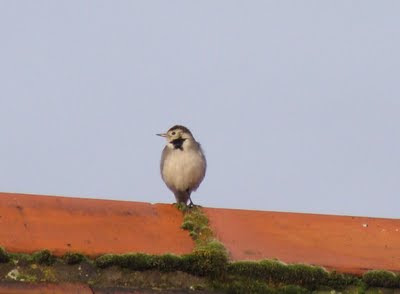 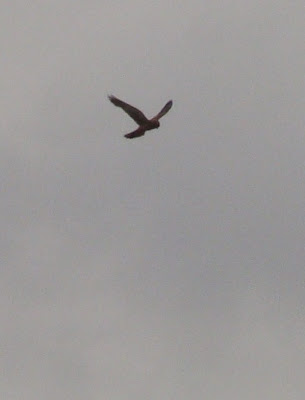 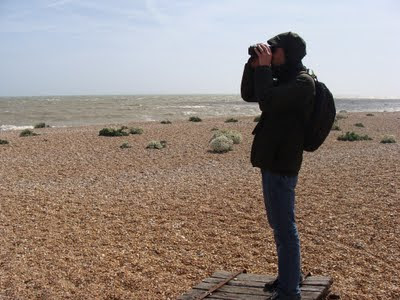 This weekend had been planned for a while but since I bought my first car last week, it provided a good opportunity to stretch its legs. Birdwatching was not a particular aim for the trip but since my companion remarked "you're always birding!" it's perhaps no surprise that a large amount of time was spent doing just this. We stayed on a farm near Hastings with rolling countryside, meandering rivers and the coast all just a stone's throw away. With bright, breezy weather all weekend, visiting tea rooms was never going to be on the cards. It was an ace trip, here are some of the birding highlights:
First stop on Saturday afternoon was Winchelsea Beach and it was just a matter of seconds before we were enjoying the sight of Sandwich Terns feeding in the shallows. We watched dozens of them poised in mid air, facing into the strong onshore winds with sleek, arched wings, before plummeting head first into the water and the shoals washed towards shore. The odd Common Tern drifted among them and the strong South Westerlies bought in a steady stream of cormorants off the sea as well as a raptor (falcon sp.) which we were unable to identify in time.

The adjacent, low-lying Pett Levels provided respite from the wind and an enjoyable walk across the grazed floodplain. Climbing a high cliff on the other side not only brought great views of the landscape but also of a passing Mediterranean Gull (its full dark hood, red bill/legs and pale wing colouration seperating it from a Black-headed Gull)  and a Peregrine which stared down at us as it passed overhead. From our vantage point we spotted a large pool nearby with hides and headed for it. It turned out to hold a superb selection of birds including Avocet, Lapwing, Black-tailed Godwit (the majority of which in rather muted breeding plummage and therefore not yet fully mature), Little Ringed Plover and Common Sandpiper. The latter was subject of discussion but confidently ID'd by my friend who knows her ''sands!' It was a first for me and also my 120th British Isles species of the year (the modest target I set in January).

Sunday was quieter but a visit to the stunning Rye Harbour Nature Reserve was well worth it to see Little Terns and numerous other birds braving the gale-force winds. Although little attention is paid to Black-headed gulls, the presence of hundreds of nesting birds here was an impressive site. It was hard to ignore the feverish activity of parent and chick, the noise and uh...distinctive smell, of the colony. The vast tracts of shingle beach and pools give the reserve unique ecological importance but also a fairly surreal quality, it's definitley worth a visit.

Birding highlights weren't confined to the daytime however. Back on the farm, the wonderful calls of Tawny Owls could be he heard echoing across the countryside throughout the night. It was lucky to catch a glimpse of one against the sky, silenty gliding high overhead but it was even better to spot a tawny chick in a nearby tree after a tip-off from our hosts. Can't wait for the the next road trip.

Out walking in East Dulwich last week Birder Dave pointed out these curious appendages on the front of a newly renovated house in Silvester Road: 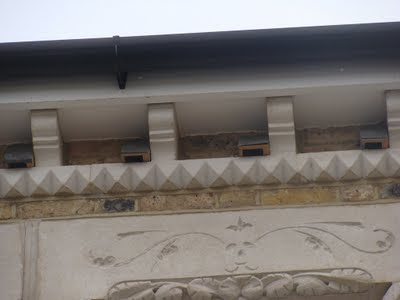 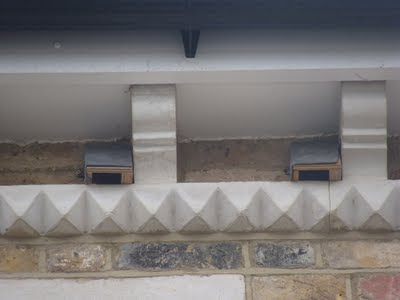 These little wooden cavities are ‘Swift boxes’ and the work of an enterprising local, bird-friendly builder. Tucked discreetly under the eaves of the house they are designed to provide nesting spaces for Swifts, one of our most distinctive summer visitors and a bird whose numbers have declined in the last few decades.
Though famed for spending most of their lives in the air, Swifts seek out ledges or cavities to nest in during the breeding season. This partly explains why they are most frequently seen in towns and villages where buildings can provide such places. But their decline (they are currently listed as having Amber Conservation status in the UK) has also been linked to a lack of suitable nest sites in these areas.
With modern architecture’s seemingly endless fascination with the use of glass panes and new-builds hardly focused on anything else other than building cheaply/filling quickly it is little wonder that birds may struggle to find accessible sites. I wonder how hard it would be to factor designs such as this into UK building law? Even if a small percentage of new buildings were to adopt this it could make a noticeable difference. If the spaces are not used by swifts there is a possibility they may attract other urban nesting birds such as House Sparrows or even bats.
Until then though it is fantastic that local people are making innovative decisions like this. These swift boxes are aesthetically sensitive, take nothing from the house and are at the very least an interesting conversation piece. What a superb idea, a simple but effective step up for nature.
Have you seen swifts in your area yet? Do you fancy adding a Swift box to your property or place of work? Check out Swift Conservation for latest news and tips on how to help these amazing aerial acrobats!
Posted by Peter at 14:02 No comments:

Nunhead Cemetary, 10/5/11, 0840 – 0955, warm and clear becoming overcast later, light wind
Blackbird* 18, Blackcap 9, Blue Tit* 7, Carrion Crow 4, Chiffchaff 10, Collared Dove 1, Feral Pigeon 1, Goldcrest 1, Great-spotted Woodpecker 1, Great Tit* 8, Greenfinch 3 , Long-tailed Tit* 4, Magpie 2, Ring-necked Parakeet* 9, Robin 13, Song Thrush 3, Swift 5, Woodpigeon 9, Wren* 36 + possible Garden Warbler 1
* indicates nesting activity witnessed
There’s no doubting this week’s star is that diminutive woodland songster – the Wren! I counted an amazing 36 birds during the walk which suggests that a good breeding season for this species is at hand. At times they made listening out for other species quite difficult with one individual proving particularly distracting as I attempted to gauge whether or not a pretty, flutey song emanating from dense undergrowth belonged to a Garden Warbler rather than Blackcap. I'm not that experienced with Garden Warblers, having encountered them for the first time just this year, so it is hard to be sure. I would certainly not be surprised to find them in Nunhead Cemetery and this song certainly seemed different enough for me to take extra note. However without certain identification it remains a tantalising ‘maybe’!
Swifts made a first appearance on the list this year, feeding over the folly and Blackbirds were recorded in good number too. Whitethroats are proving elusive although I’m sure there is good habitat for them there. Perhaps next time?
Posted by Peter at 20:36 No comments:

There are certain birds that every birdwatcher is keen to catch up with each spring. The first returning migrant is always a welcome moment; perhaps a Chiffchaff singing it's repetitive song from atop a tree or a Sand Martin darting through a local waterway. Bar an elusive House Martin and the ID challenge posed by a Lesser Whitethroat, so far my spring list is healthy. I've loved being able to record my first Swallow, Reed Warbler and Cuckoo of the year in the last month. But there is one bird in particular that I've wanted to see for a while.

It was my friend Jo who spotted it first, as a dark speck in the sky, wheeling far above some distant pylons on the River Lea in north east London. Moving fast and easy on long, pointed wings I initially thought it was an early Swift. But as it neared and the markings became more obvious I realised I was looking at my first Hobby.


﻿﻿﻿﻿﻿
﻿﻿﻿﻿﻿The Hobby is a small Kestrel-sized falcon that winters in sub-saharan Africa and migrates to its northern breeding grounds in spring. It has markings similar to a Peregrine (note the dark, facial 'moustache') but is smaller and can be told apart by its pale, streaked underside and reddish 'thighs' (as this photo shows) In flight Hobbies are fast and agile which enables them to catch large flying insects in their talons that they can then, rather impressively, eat in mid-flight. They are also able to catch smaller birds such as pipits, martins and swallows which become their main food source later in the season.


I was thrilled with my first encounter with a Hobby so you can imagine how I felt later that afternoon as I stood watching seven individuals gracefully terrorise the insect population of Lee Valley Park. At one point they were even joined in the air by a Buzzard and two Sparrowhawks. I was rooted to the spot and it was only at the promise of ice cream and a cold beer that I was lured away. Hobbies are superbly elegant aerial hunters, beautiful and hypnotic to watch, I look forward to welcoming them back every spring.

Getting up at 3am to go wandering around a dark, mazy woodland is probably not a lot of people's idea of fun, but that's how I chose to see in this morning.
Today is International Dawn Chorus Day and to celebrate this I lead a walk at Sydenham Hill Wood, organised by Ashley, the Warden. It was a great turn out for such an early start and the birds didn't let us down. Over an hour and a half between 0445 and 0615 we recorded 15 species, which in loose chronological order were:
Robin, Blackbird, Wren, Great Tit, Blackcap, Chiffchaff, Woodpigeon, Blue Tit, Song Thrush, Goldcrest, Carrion Crow, Jay*, Ring-necked Parakeet, Great Spotted Woodpecker*, Kestrel*
(*birds we saw but didn't hear)
The dawn chorus, the period as night passes and birds seek to re-establish breeding territories and advertise their presence, is easy to miss in a city like London but undoubtedly one of nature's little treasures.
“...let him betake himself one fine May morning to some green wood with plenty of undergrowth, where the migrant warblers consort and view in harmonies with our resident British songsters. There let him sit and listen, listen till, after their midday feed, the birds’ silent hour brings a temporary interval in the concert. Let him listen again when they resume in fuller voice after refreshment. Listen till dusk rings down the curtain and all but one Great Voice are still.
...let our critic do all these things and drink in the unrehearsed and unscored melodies. Then let him return to ‘civilization’ and tune in his radio set to some ragtime production intended to retail delectation to jaded city dwellers. He may then ask his heart the question, Where does true music dwell – in modish man-made cacophonies or in the ageless cadences of British songbirds?”
(from 'Bird Music' by A.L Turnbull, Faber and Faber, 1953)
Posted by Peter at 14:29 No comments: