Squinting through the mid-morning haze, across the gently sloping valley and scattering of dry copses, the scene reminds me of places I've passed through in Portugal. Focusing on a distant bare tree that long ago gave up begging for water, there is a murmur of excitement from the small crowd near me as a bright flash of turquoise sees a Bee-eater alight on top of its pale branches. In the shimmering haze it has all the colours of an oil slick, occasionally aligning to give the impression of one of Europe’s most beautiful birds. Then another bird appears next to it before both disappear with a burst of wings and glide low out of view. It might not be Portugal but this is definitely bee-eater country.

In fact the setting was the Isle of Wight, on Saturday, but to these birds, a pair and a charitable third 'helper', it is home - marking only the fifth time Bee-eaters have bred in Britain, beyond their southern European range, and, with the news that they were feeding young in the nest, only the third successful attempt.

I’d been hoping for a chance to see the birds since the news was released recently of a pair at the National Trust’s Wydcombe Estate in the south of the island. With a plan hatched to make it a weekend trip given the girlfriend stamp-of-approval, we headed over after work on Friday, arriving to pitch our tents near enough under the ramparts of Carisbrooke Castle as dusk fell as quickly as the rain. The campsite was excellent and gets my recommendation over the numerous caravan sites that dominate on the island. At some point in the early hours of the morning a willow warbler made it's way along the hedgerow behind the tent calling, in doing so, it filtered into my sleep...or perhaps I dreamed it? I'm not sure, but we woke to blue skies and a warm breeze at least.

We took the bus down the quiet, winding roads to Whitwell and walked the short distance cross-country to the site, accompanied by a birder from Hampshire who’d had the same idea. It wasn't difficult to find the site: 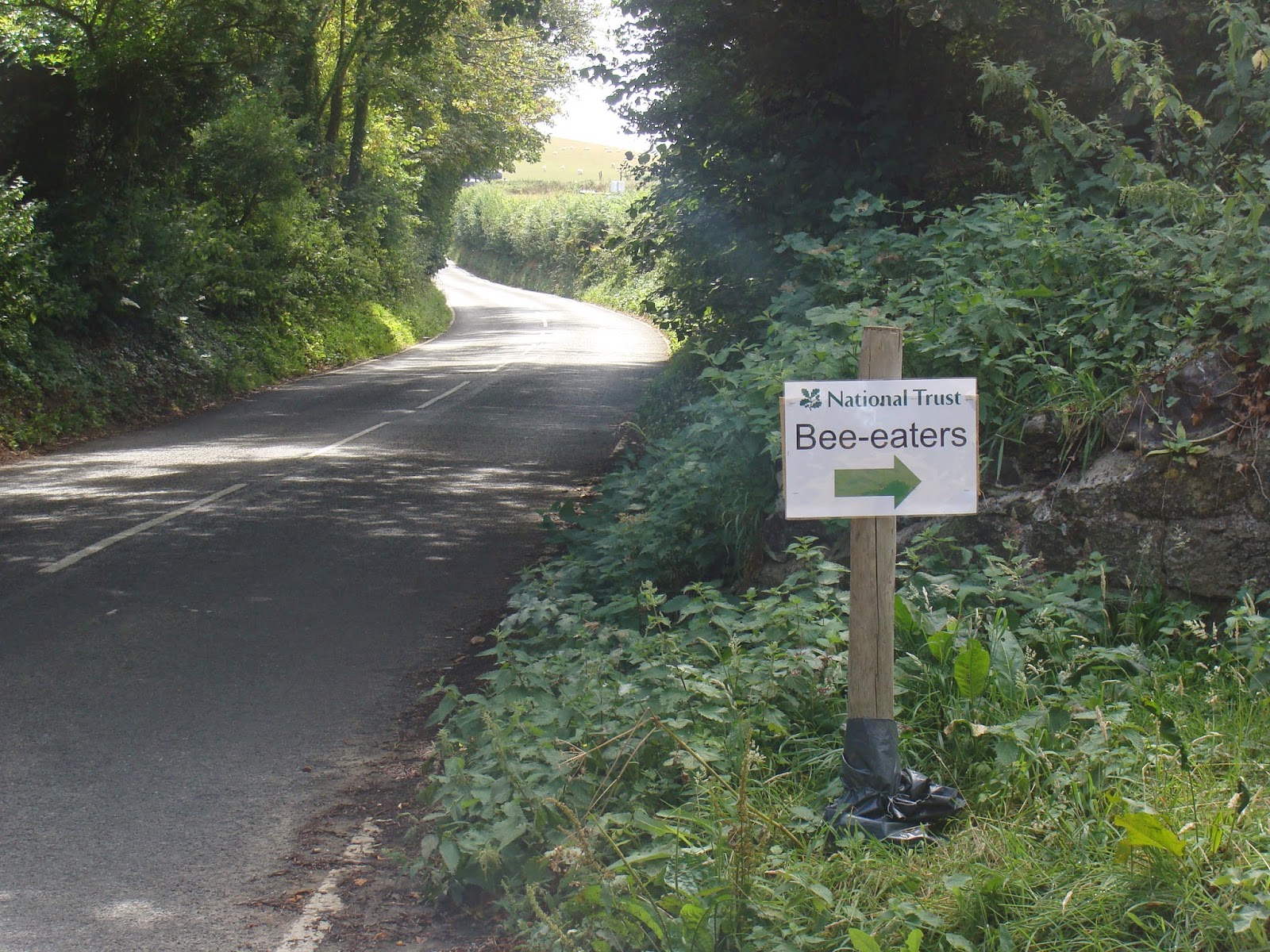 The National Trust and RSPB have done a great job in setting up a public viewing area for the birds and showed us over straight away, keen for everyone to see them. The views at distance were good and clearly no impact was had on the birds which hunted actively over their favoured area for the two hours we stayed. Three adults were seen, with at least one on show most of the time. A couple of aerial forays bought them close to our viewpoint as a nearby sparrowhawk made a few fleeting appearances. The birds regularly hunted from a telegraph wire and I had great scope views of a bird demolishing various bees and a dragonfly by banging them on the wire to remove stinging parts. Sometimes they disappeared with their prey, presumably to the nest site, but I watched one consume a brown butterfly, a Comma perhaps, itself.


Ok, my attempts to record it in photographic form are laughable so here’s one from Spain in April this year: 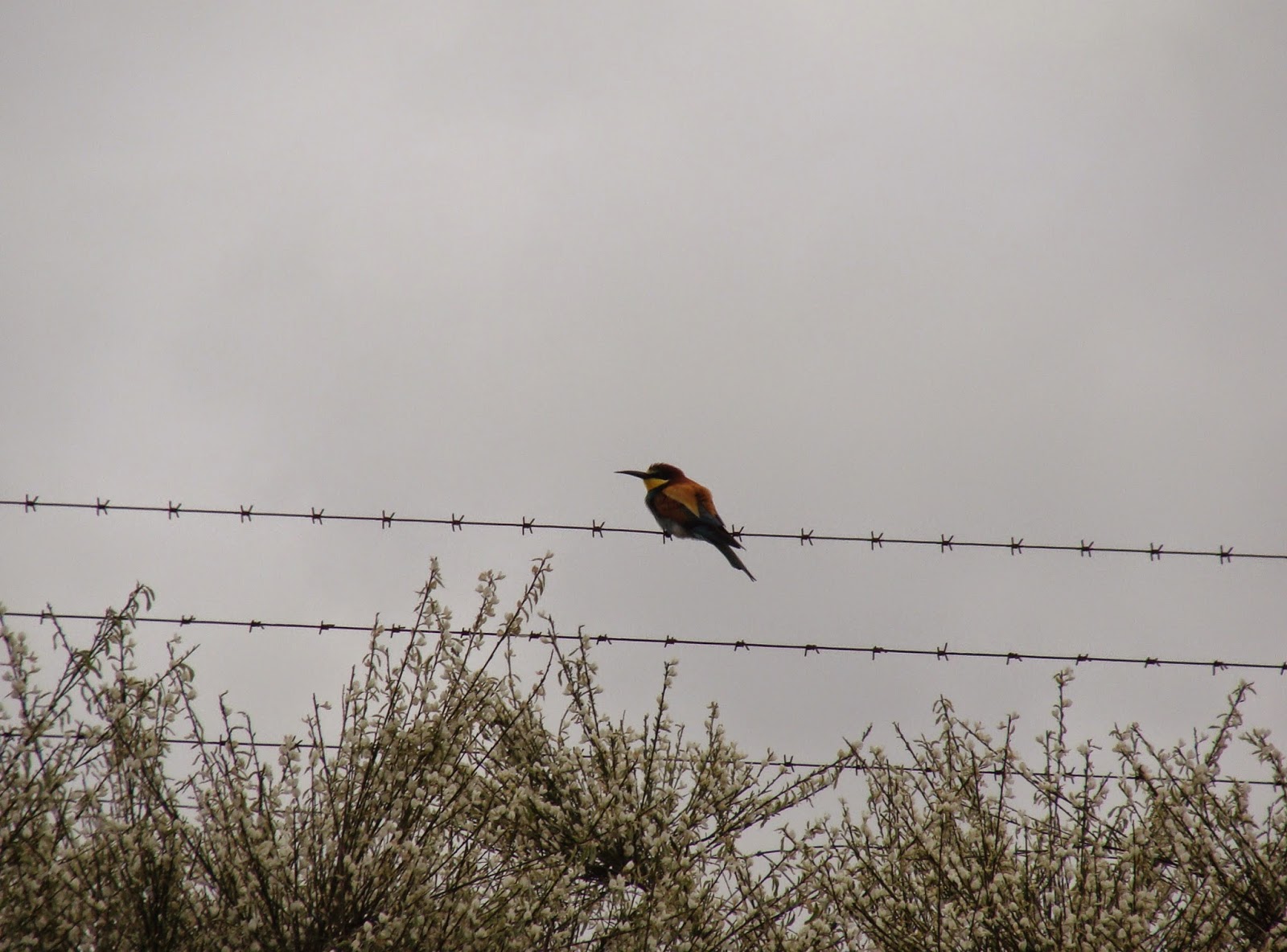 Mission accomplished and Bertha-related tent-mishaps just about averted, the rest of the weekend unfolded nicely too.


On the 29th April this year, I saw this Avocet (above) feeding on the small pool in the area known as 'coastguards' at Cliffe Pools rspb reserve. Scanning across, with the bird showing comfortably at good range, I noticed the colour rings on its legs (Left: Red/Yellow, R: Yellow) so noted down the pattern and digiscoped a passable photo for my records. I've seen colour ringed avocets at the site before but never succeeded in getting any results from the various online resources.

After similar efforts with this this bird, I was expecting the same outcome so I was pleased to get an email last week which suggested it's history could be traced and requested my photo. Shortly after I received an email from the ringer, John Middleton, with the bird's history which turned out to be very interesting!

It turns out that this bird was ringed on 02/07/1990 at Titchwell, Norfolk, and these are the subsequent sightings:

I knew that waders can be long lived but I had to do a double take when I saw that initial date! These records mean that when I saw this bird, it was approaching it's 24th birthday - what a remarkable achievement.

Looking through the list of sightings there are some interesting patterns - particularly the bird's regular movement between North Norfolk and the Thames estuary, after a visit to Devon as a young bird. There are also the three long periods with no sightings.

Amazed with the result, I forwarded it to the BTO for their interest and yesterday had an email from Lee Barber, Recoveries Officer, who was able to confirm the bird and share some further information. This bird was one of a brood, all of which were ringed at the same time and the odd record still comes in. This means it is currently one of the longest-lived avocets ever recorded in the UK. Lee also points out that in 1990 Avocet was still a rare breeding bird (they become extinct in the UK in 1840 and only recolonised North Norfolk in 1947). Projects like this help establish important information about movement, health and other things. The European record for Avocet is currently 27 years 10 months.


Thanks to John, Lee and Raf Vervoort for their help.
Posted by Peter at 18:47 No comments: