Apologies for the lack of activity recently, it's been a pretty hectic couple of weeks; a lot of early starts for surveys coupled with a few big changes. More on that soon but in the meantime here's a pic I've been meaning to put up for a while...the totally spanking male Common Redstart that hung around Swigshole Farm out near Egpyt Bay for a day or so last Friday. Obviously not a drop-everything 'Pallid at Cliffe' job but a beautiful little bird and a lifer for me :)

After walking up and down the track for a bit, it eventually hopped out from a dense bank of Hawthorn onto the path and did so on and off for the half hour we were there. The fact that it was a male individual made it a bit special, just because of the fantastic colouration. We got good views of the fine rusty tail, which it flicked up and down while on the deck, its bluish upperside and the gorgeous dark facial plumage contrasting with the frosty white 'eyebrow'! It's not hard to see why this bird attracted the taxonomic latin name of phoenicurus - with that sooty face and fiery red underside it could be reminiscent of the mythical Phoenix.

Small, Robin-sized Redstarts are summer visitors to Britain from Africa, and are more commonly found in west coast deciduous/Oak forests. A pretty scarce passage bird in Kent so nice to catch up with this one.

Thanks to Jason for the tip.

*Update - London gets in on the Redstart action! Check it out: www.solomig.blogspot.com
Posted by Peter at 18:47 No comments: 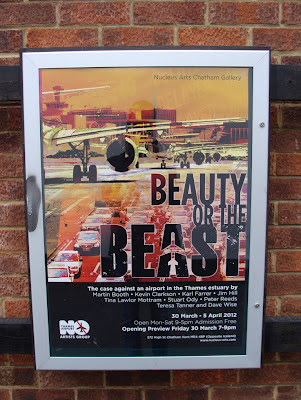 I've been meaning to write a few words about the ‘Beauty or the Beast’ exhibition that was on at the Nucleus Arts Centre in Chatham recently. I managed a quick look round before it closed, it was excellent.
Put together by a group of artists under the banner of the ‘No Thames Airport Artists Group’ the exhibition formed their highly visual response to the much-hyped and chronically under-thought Estuary Airport hub proposal.
Each artist approached it with their own unique style. Some reflected on the marshes as a wilderness, as an escape or an adventure; the possibilities that this environment offers for people and wildlife. There were treasured landscapes captured on canvas and via some stellar photography. There were cold, hard facts. There was humour. In the small, understated room, their resistance took many forms.
The attention-grabbing posters at the entrance by Kevin Clarkson illustrated the nightmare alternatives. His bold, innovative graphics highlight the numbers involved: 4320 flights every 24 hours, 150 million passengers a year. No messing about. No excuses. He ponders what the 'Garden of England' will look like in 2030. Following this were a series of superbly realistic aerial paintings of the estuary (mimicking the kind that architects use I wonder?). I stepped back to admire the glittering landscape until I realised something was wrong. Half the Hoo Peninsular was missing; concrete greys and jet streams were smeared across the rest. This is the nightmare come true. The focus here is on how an airport would affect not only Kent, but also Southern England as a whole.
I really liked Pete Wise’s series of pinhole photographs. Set on long-term exposures they showed still dusky, landscapes where time is marked by the glowing trails of the sun and stars. Much of the land threatened by development has remained fundamentally the same for hundreds of years; no amount of mitigation can recreate a landscape of this size, complexity and with such biodiversity.
Portraits of Charles Dickens and Magwitch by Peter Reeds brought another argument to the table- that defending the cultural heritage of North Kent and its small but significant place in popular literature. I like to think that the dirty sneer on Magwitch’s face was directed at those who dare mess with this place. It’s a light touch but while I understand the importance of Dickens in the artist’s response, I think in the heat of battle, this association will count for little. If inspiring others to what might be lost is a goal here, it will be evocative to some but the significance will be lost on others.
Less subtle were the three slate gravestones propped up against one wall. Inscribed with the names of just a few of the species whose status locally will suffer irreparably if these cherished wetlands succumb to development: Marsh Harrier, Bee orchid, Little Egret...
What this all-too-brief exhibition succeeded in is showing the scale of what we face. It is a passionate and personal response to the short-sighted, big-money ideas that threaten this unique area. I think creative, well-organised shows like this are a great way to get a message across and I hope it turned a few heads. I don’t know what the group have planned next but I’d love to see this go ‘on tour’. This is not something that just affects Kent, it is a national issue and it would be interesting to see what kind of feedback it gets elsewhere.
Beauty or the beast? It’s no contest.
Links:
NTAAG tumblr
Martin Booth  (Photography)
Pete Wise (Medway Canoe tours - I'm totally doing this!)
Teresa Tanner (Artist)
FONKM (Heroes)
Apologies to those I missed.
Posted by Peter at 20:00 1 comment:

What a difference a week makes

It's amazing what difference a week makes. Last weekend I was restlessly gazing out at the drizzle and the slow, slow skies. The ground here was parched and the clouds were heavy. A pair of Treecreepers in a Long-tailed tit flock on any other day would've been a result. But my heart was set on hirunds, phylloscs and sylvias; at least it turns out that I didn't have to wait long. Things are suddenly green again! And the birds are back...

While on the marsh on Tuesday, checking the progress of our nesting Lapwings, a lone Swallow drifted through my scope's field of view. April 10th - my first of the year. It was headed north west; the opposite direction from that day last September at Dungeness when I watched thousands stream across the beach and over the channel.

Wednesday brought the return of another iconic migrant to the marshes. I was half-asleep at six thirty but vaguely aware of the world. I heard the sparrows first (as always) and then out of nowhere, in the distance, a faint but undeniable 'Cuckoo.....Cuckoo'. It startled me awake and I smiled, remembering what Christmas used to feel like. Another first of the year, had it come in over night? The same morning Cuckoos were popping up all over Kent. The BTO give their average first date of arrival as April 19th so are these early birds or is it a sign of the times? We can learn a lot from these studies, given the potential they have to highlight wider environmental changes. Cuckoos are among the most fleeting of migrants. Free of brood responsibilites, by the beginning of June, adults will already be preparing for their epic journey back.

Thursday, the migrants just kept on coming: Garganey, Marbled duck, Humboldt Penguin, Ruppells Vulture. Ha! (I went to London Zoo) But more on that another time...

Out on the reserve today to get our heads around the complexities of Bearded Tit surveys, Simon and I both clocked a wheezy but distinct 'ptew...ptew' from somewhere nearby. Mentally rumaging through the old grey stuff, it finally clicked: a pair of Yellow Wagtail ducking down into a nearby farmer's field. Today however was all about the return of Luscinia megarhynchos. Mega in name and song: the Nightingale. The first bird was reported back at Northward Hill on Wednesday (April 11th) with at least two recorded in yesterday. I caught the tail end of that trilliping, gorgeous yell this evening, skipping like a worn out record from a patch of bramble nearby. Amazing, and it's only just beginning.