Out on the marshes, up on the hill

I enjoyed a beautiful walk out across the Hoo marshes from RSPB Northward Hill on Saturday, our finest spring day yet. The Bromhey Farm trails were alive with birds and their myriad warblings - Linnet, Whitethroat, Dunnock and Chaffinch all relentlessly competing for air time. Several Lesser whitethroats were showing well and it was fantastic to hear my first Nightingale of the year, its incredible song emanating from an impenetrable thicket, all whirrs, clicks and woop woop woops. The walk to St Mary's Bay and back was largely migrant-free save a couple of Whimbrel dabbing about in the lowtide mud, the odd Swallow getting battered in the northerly headwind and two Willow Warbler flitting through the hedgerows on Decoy Lane. At least one pair of Common Buzzard hung above the hill in display, a trail of rooks following their every move. From the orchard I'm sure I caught a brief snatch of a purring Turtle Dove from somewhere but my search came to nothing. Once upon a time we wouldn't have had to look so hard but that is now the fate of our fastest declining spring migrant. The North Kent marshes remain one of the best places I know to see them so fingers crossed some birds make it back this year. Every year is crucial now.

Back up to the farm I saw the new scrapes are coming on well with Avocets already paying close attention and a pair of Oystercatcher looking comfortable too. All around, Lapwing peeled across the sky. It was great to feel that pulse of spring again, life humming from the depths of the grass up to the wispy clouds.

In the evening I walked up through Great Chattenden Wood, not seeing a single other person. I walked the paths in quiet awe of the place, winding through the bright coppices of Hazel and Ash with the early green shoots of bluebells carpeting the woodland floor between them. I circled round, following the mesh fence that divides the wood but perversely keeps it safe. Or until now at least. This is the old Lodge Hill MOD compound, or a small part of it. Once it was home to soldiers, but in their absence it's now a haven for birds, invertebrates, mammals and plants. In recognition of this importance it was recently awarded SSSI status by Natural England, the government's environmental advisory department.

Along a ride, by one of the fences, a song rings out crystal clear in the evening stillness - a Nightingale, the headline act in this woodland cavalcade. It's depth of voice, its tonal quality, is to my experience, unrivalled in the bird world. In our world. And this place is where it comes to breed, over thousands of treacherous miles, to raise the next generation; this is its choice and will. But it is more symbolic than superior, with so many riches here. It's a nice moment and I should enjoy this evening and this place, but it's hard when you realise this could all disappear in an instant.

Chattenden Wood and Lodge Hill SSSI is threatened with a drastic new town development, one of the largest residential proposals in Europe, that will realistically alter this unique place forever. Keep an eye out and tell your friends and if you visit, don't forget to listen out. 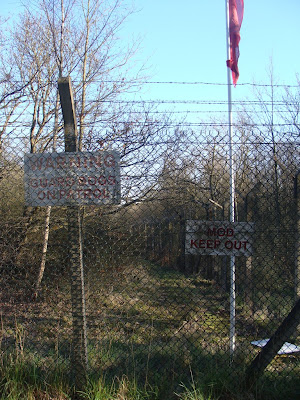 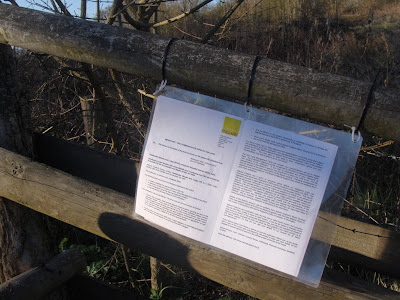 You can't see it here (they're very sneaky!) but this is a Nightingale singing yesterday evening in Chattenden Woods and Lodge Hill SSSI in Kent. Surveys have shown that this is one of the most important sites in the country for this iconic and threatened species but one that could be facing destruction by an insensitive and wholly inappropriate 5000 home development. Please read more about it here.

Last weekend I managed to fit in a last minute trip down to Somerset and back. It was a lovely weekend; the weather provided a kiss of life, all spring-like and fresh, I saw bright, smart looking butterflies on the wing for the first time in ages - Comma, Small Tortoiseshell, and Brimstone. I also visited the pub that's on the cover of the Good Pub Guide 2013 (nice pint of 6X but Pea Sorbet anyone?)

Invariably the sunny conditions prompted plenty of bird activity and the levels were full of song. I even saw my first House Martin of the year, moving north across the blue sky as I waited for RSPB Ham Wall's mega Pied-billed Grebe to show on Saturday lunchtime. After finding myself alone at its favoured area, it was thanks to a passing photographer who pointed out the grebe's distant call that I eventually managed to connect with the elusive yank. The call was remarkable - a distinctly un-Grebe like grunting 'Oo oo oo' (some neat video here) and by following this, after an hour of patiently watching the reeds, I was able to get some decent views. It's not spectacular but it's a nice-looking bird with the pale, chunky bill of its name, large eye and sturdy neck giving it a 'top heavy' appearance. It was clearly behaving in a territorial manner and I admired it's eagerness to chase off a pair of (much larger) Shoveler. Unfortunately, with its nearest potential mate probably several thousand miles way, its unlikely to have much luck in Somerset but still, apparently there is a UK record of a similarly vagrant bird producing hybrid young with our own Little Grebe! Pretty amazing.

Despite bagging a lifer before lunch, it wasn't actually the grebe (or the pea sorbet) I'll remember the trip for - rather it was a wonderful encounter with a scarce but ultimately much more common UK visitor on the slopes of the Mendip Hills earlier that morning.

I've only ever had fleeting views of Ring Ouzels so to find a field full of them in close proximity at SWT's towering Draycott Sleights reserve in the hills was special. With good numbers reported the previous week I thought it might be worth a visit and although it took some time to coax the car up the steep lane and figure out the fields and limestone outcrops of the site, it soon turned up great views of the 'mountain blackbird'. Over the course of an hour or two, myself and another local birder out ouzeling caught up with numerous birds dotted across the slopes. There were handsome males with their distinct white gorgets and, with a similar dymorphism to Eurasian blackbirds, the brownish females with their paler markings. And what could be better than gazing at Ring ouzels on a sunny hilltop in spring? Howabout a couple of wheatears thrown in with them for good measure....a great morning and since it's not every day I get to see ouzels, here are some dubious photos to celebrate it a very fine bird indeed...

I saw my first Swallow of the year today, closely followed by my second. This is normally a moment to saviour as their arrival traditionally heralds brighter, warmer days, but those seemed so very far away as these two early arrivals battered their way north in the gently falling snow of Mayesbrook Park in East London. The birds, apparently the first for London this year, flew low - one no more than two or three metres from my boot and barely an inch above the surface of the shallow brook. This is behaviour typically observed in the most difficult conditions as birds attempt to glean whatever few insects may be about as well try and make use of any sheltered areas. Within a minute they had disappeared from view up the stream and over the houses in the distance. I cannot think of  a more apt sight to illustrate this desperate start to spring and the confusing, worrying signs of change.

We are in that funny period now as lingering winter migrants cross paths with spring migrants. Today, after the swallows, I came across an equally iconic winter visitor - Waxwings (I've never had those on the same day before!) The latter were present in the park when I arrived in the morning and I could hear their sweet trilling calls every now and then as I worked. Heading home later I was just outside the park when their calls filtered into my consciousness again and, looking up, I saw the tree in front of me was full of them! After a while they shot across the road and began feeding on a straggly Cotoneaster, conveniently placed right next to a bus stop. I followed and after a short wait using the bus stop as a temporary hide, they returned and gave amazing views just two or three metres from me. These migrants were no doubt faring better in the conditions but still have a long journey ahead. Amazing birds - probably won't see them again for a while so a good excuse for another round of photos... 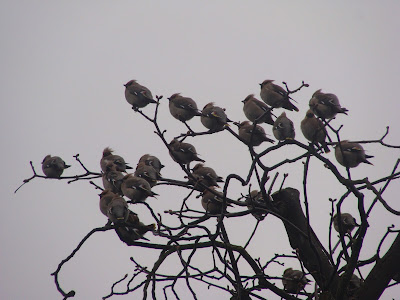 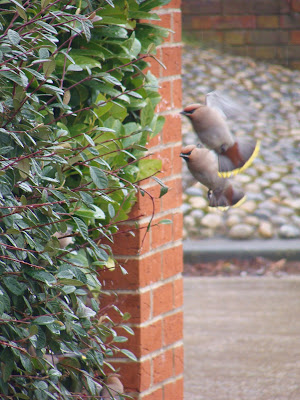 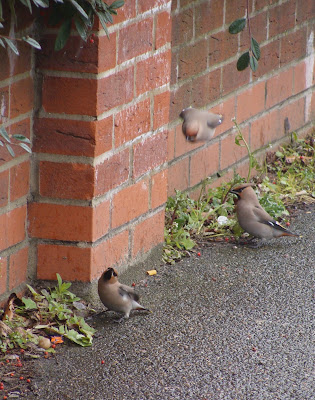 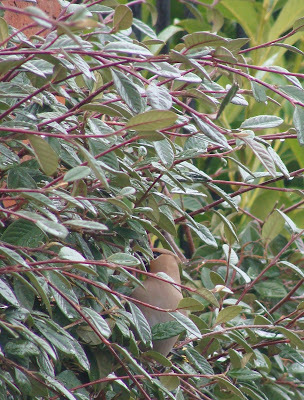 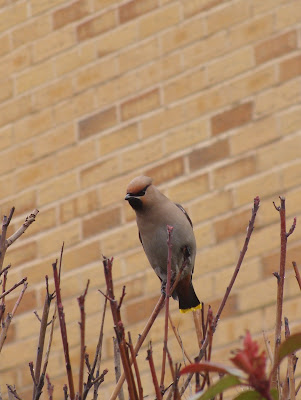 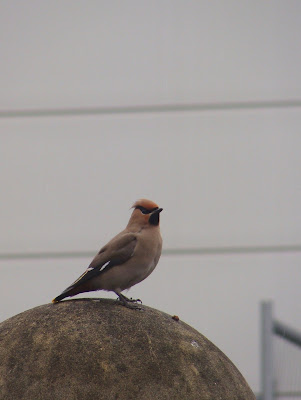 A darting speck across a grassy bank, a flick of white in my direction, a pause - that pose.

A relieved smile, I think 'ah, welcome back!'.

And Winter ends like that, with no fanfare, just a traveller returning... 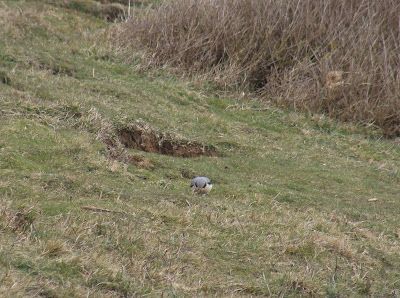 The thought of getting to April 1st without one was, frankly, a worry, but thankfully I got there with hours to spare. Finding these two cracking birds on the cliffs just past Seaford Head on Sunday, while my Grandma had her afternoon nap, was very satisfying. It takes a special bird to upstage a Bluethroat and a Kentish Plover, two new British ticks I nabbed over the weekend at Dover and Rye respectively, but strangely, that's how it feels. As one of the most worldly of passerine migrants, wheatears have IT, that thing...the mystery of all those miles behind them and all those lying ahead. They're not particularly flash and they don't have a memorable song, but still they make me smile like nothing else.

Have you got yours yet?