It seems to me that even before thousands of people dedicated an hour this weekend to birdwatching, the RSPB Big Garden Birdwatch was a success. I often hear criticism of the RSPB's marketing power but judging by the number of  news articles I saw that covered the BGBW this week, it's working. It was even the cover story on the weird, in-house 'newspaper' in Waitrose* yesterday. Perhaps the real proof though came in the form of numerous non-birdy friends and colleagues who I found suddenly taking an interest. When it comes to birdwatching, the more the merrier!
*I don't normally shop here but I was passing and I like their vegetable pasties. I also like their biscuits.

Not having a garden of my own to conduct a 'garden birdwatch' in, today I sought refuge for an hour in my surrogate garden - the beautiful Sydenham Hill Wood in Dulwich. With cool, clear skies overhead and a full flask of coffee in my bag I staked out a clearing in the wood for an hour. This list is isn't gonna win prizes, but it's a valuable snapshot of a woodland bird community.

Did you go birdwatching this weekend? How does your list compare? It'll be interesting to see what trends emerge from this years survey.﻿﻿
﻿﻿
Posted by Peter at 23:58 No comments:

Name that Bird - Round 2

Ok folks, it's time for another round of the game that is sweeping the nation - Name that Bird!
I've tried to make it interesting, so identify the bird in each picture and answers will follow next week...
1) 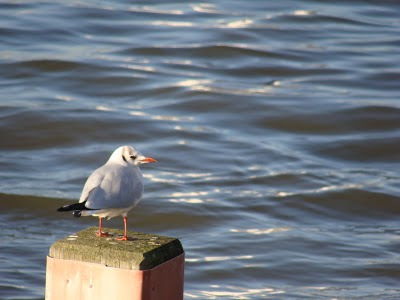 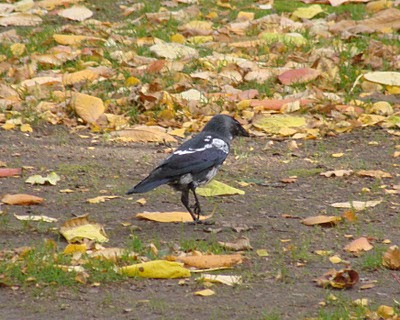 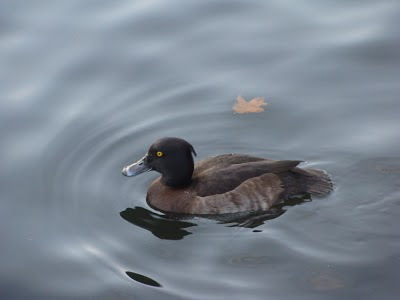 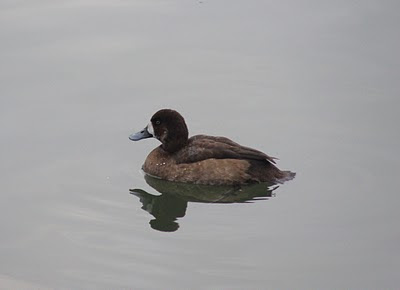 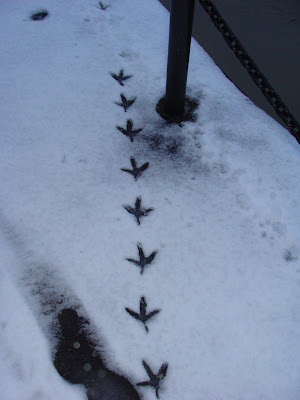 ﻿All photographs by P Beckenham
Posted by Peter at 16:53 2 comments:

Leaving the mist and drizzle of London behind, yesterday I was lucky enough to take part in a college field trip to the RSPB's Old Hall Marshes reserve on the Essex coast. The sun was shining, the sky was clear and the birds were present in their THOUSANDS.

Old Hall Marshes comprises salt marsh, reedbeds, brackish pools (characteristic of estuaries, these are areas of water with a higher salt content than freshwater but not as much as seawater), grazing marsh and improved arable fields and, as such, is a fantastic site to discuss and witness the application of certain habitat management techniques. This variety of increasingly scarce habitats also means it is home to a wonderful array of bird species: 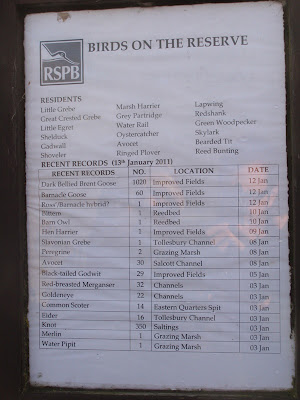 With so much birdlife around I invariably found myself juggling binoculars and camera a good 200m behind the rest of the group at times, but it was worth it. Dark-bellied Brent and Greylag geese could be seen and heard in huge numbers on the distant fields while the brackish pools on the grazing marsh were teeming with countless species of waterfowl, including Goldeneye, Wigeon, Teal and Tufted ducks. As well as great views of the surrrounding area, a bracing walk along the sea wall provided a good vantage point to see flocks of birds circling over the Blackwater Estuary. Lapwings, Starlings and Skylarks tumbled gracefully about above our heads and at one point a flock of Knot went speeding by low over the water. Forget those jokes about Essex birds, this lot are the real deal!
To capture the scene as a large flock of geese took flight I tried using the 'movie' feature on my Sony Cyber-shot. It's pretty basic and unfortunately it didn't capture much sound but hopefully gives some idea:

I found this interesting arachnid on my bedroom wall last week. I’m familiar with a few of the more obvious species in the UK but and am struggling to ID this – what do you think? 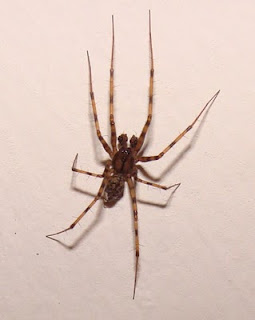 The banding on the legs is quite striking. Size-wise it was about 22-24mm from the tip of the back legs to the tip of the front legs. The closest I could find was this image from gardensafari.net: 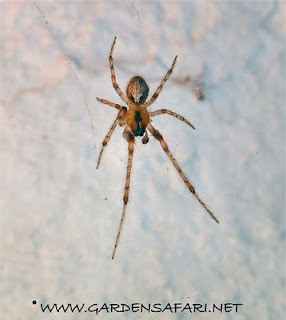 Zygiella-x-notata. An indoor, warmth-loving species of the genus Zygiella. It would appear to be a fair match for a male specimen; they both have banding/fine hairs on the legs although the abdomen in my photo appears smaller and lacking the silvery colouration. Hmm, best stick to birds I guess!
Posted by Peter at 22:14 No comments:

Sunday 2/1/11
Fully recovered from the New Year festivities and with little else to do on a cold, grey Sunday I decide it’s time to catch up with birdlife in the local area. Up at Hilly Fields Park I’m delighted to see 20+ House Sparrows roosting in the hawthorn hedge on the path adjacent to Cliffview Road. It’s the largest flock I’ve seen in the area since moving in April. The park also yields some common garden species and a sizeable flock of starlings on the playing field. From Hilly Fields I make the short walk down to Ladywell Fields for a quick lap and I’m barely in the gate on when movement on a standing dead tree catches my eye - a Great-spotted Woodpecker. The rest of the park is quiet however and aside from a Song Thrush (the first I’ve seen in months) I see little else.
Species Count: 16 (Jay, Carrion Crow, Magpie, House Sparrow, Blue Tit, Great Tit, Starling, Blackbird, Robin, GS Woodpecker, Wren, Song Thrush, Chaffinch, Feral Pigeon, Woodpigeon, Ring-necked Parakeet)
Monday 3/1/11
Forgetting today was a bank holiday and with plans for dull trips to the post office and bank duly scuppered, it seemed the only sensible thing was to head out for more birding! I mull over the possibilities before jumping on the 108 bus from Lewisham and head down to a favourite wandering spot on the Greenwich Peninsular. Alighting at the ecology park I find a flock of goldfinches feeding noisily in some slender silver birch trees. The park is closed but from the outer boardwalk I spot several greenfinches among a throng of tits close to a feeder and two honking Canada Geese flying low overhead.
A brisk walk along the Thames path brings hundreds of Black-headed gulls, a dozen Teal sheltering close to the river wall and a single male Gadwall resting among Mallards on a jetty. At the O2 I hop on the Jubilee line one stop to Canary Wharf and continue my walk south on the Isle of Dogs. In South Dock upwards of 20 Cormorants make quite a site as they alternately cruise and dive for small fish. I’ve never seen so many in one place. A little further along, my first sighting of a Scaup (adult female) is the highlight on Millwall Dock. To my knowledge this duck is generally a scarce winter migrant in the UK and not typically found inland so I am quite pleased with this. As the afternoon darkens there is little to be seen at Mudchute Farm so I head for the DLR, disturbing a Mistle Thrush on Millwall Park as I go. I finish the afternoon by jumping off at Deptford Bridge for a walk home via Brookmill Park. This sliver of green space between Deptford and Lewisham is a valuable local haven for birdlife and this afternoon, in a shallow rocky pool formed by the river, I observe a Wren and several Long-tailed Tits drinking alongside five bathing Redwings.
Additional Species count: 19 (Goldfinch, Greenfinch, Canada Goose, Coot, Black-headed Gull, Herring Gull, Teal, Cormorant, Mallard, Gadwall, Great Crested Grebe, Scaup, Mute Swan, Mistle Thrush, Long-tailed Tit, Redwing, Grey Heron, Mandarin, Moorhen)
Tuesday 4/1/11
Routine admin is the priority today with the highlight being a quick lunch by the river at the Cutty Sark in Greenwich. The river is calm and apart from a pair of Pied Wagtails nervously darting about on the shore and the odd Common Gull among the crowd of Black-headed Gulls there is nothing new to add to the list today.
Additional Species count: 2 (Common Gull, Pied Wagtail)
Weds 5/1/11
An early start to the day as I meet a birder friend over at Dulwich Park for a walk around. A singing Coal Tit and a Sparrowhawk flying over are good early ticks. Over at the lake a pair of Greylag Geese has flown in to join the small crowd of Tufted Ducks, Mallards and gulls - a common enough species, this is apparently fairly unusual for Dulwich Park. The highlight of the morning however is undoubtedly a Little Owl that we briefly spot roosting in a hollow branch cavity of an old oak on the lawn at neighbouring Belair Park. 16+ Siskin feeding high in the branches of a row of Aspen trees and a good visual of a juvenile Green Woodpecker in nearby Sydenham Hill Wood complete a successful morning.
Additional Species count: 9 (Coal Tit, Nuthatch, Sparrowhawk, Greylag Goose, Tufted Duck, Little Owl, Siskin, Green Woodpecker, Goldcrest)
Thurs 6/1/1
Worked today so no chance to get out and about but I did spot the Brookmill Kingfisher on my way to the DLR. The sight of that electric blue flash darting over the river is always a reason to stop and marvel.
Additional Species count: 1 (Kingfisher)
Total for week: 47
Posted by Peter at 19:36 No comments: