Today was a glorious day in north Kent, the jubilation at not being smacked around by howling winds for the first time in a fortnight heightened by a liberal dose of winter sun. Conditions were ideal for my first Medway low tide count of the winter which I undertook this afternoon for three sections of the estuary off Hoo marina. These are the combined results for the three (consecutive) areas:

5 Gull species were listed but not counted. Also noted were a single Linnet that flew along the sea wall, while a Marsh Harrier was present before the count at Stoke Saltings, the other side of Kingsnorth Power Station.

The mid-afternoon tide time meant the latter half of the count was spent looking near directly into the sun but I feel this is a good representation of the area's bird life today. From this data and that compiled by others around the Medway (and around the country), we will in time be able to understand better the relative importance of different areas to wetland birds along with local, regional and national trends in numbers. 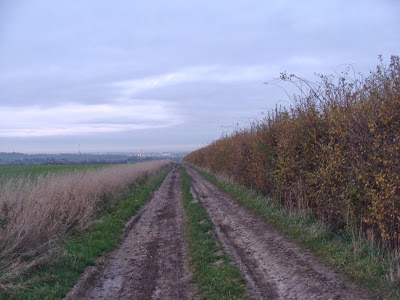 You won't recognise it.

This hedgerow is the life blood of my small patch of North Kent. It runs for about 300m, north-south, along a rutted track that separates several bland, featureless fields. It is over 2 metres tall and a metre plus wide. In it grows Hawthorn mostly, with a scattering of Field Maple and Dog Rose. It didn't use to be here, it was planted in the last decade with the help of subsidies that the farmer received to make his land more wildlife-friendly. I love this hedgerow and wish I could tell the farmer that, I wish I could tell them to plant another; but I never see anyone out here, just the odd farm-hand banging around in a tractor and small groups of workers picking vegetables in summer. I love this hedgerow because this where the birds are. It's where most good things happen on my otherwise quiet patch.

Yesterday afternoon, with the sun already gone, I walked round the fields for the first time in a few weeks. As I expected, given the time and the season, everything was quiet and still. A Pied Wagtail flicked over somewhere above and a dog walker loped by, ignoring my greeting. That was about it.

It stayed much like that until I reached the hedgerow. As I walked along it, I peered at the skeletons of last summer's nests and tried to guess who made them. A short way along there was a feathery scuffle ahead of me and three birds flew out. They gave a gentle, rippling call in flight that told me they were Corn buntings. It sounded especially fragile in the cool dusk, easily missed and very much a secret sound of winter in a place like this. I watched them disappear across the ploughed fields into some distant scrub.

In the end I counted 17 birds in the Hedgerow which is incidentally the same number that I saw in a flock here last winter. Looking around it's easy to see why they were there, it provides shelter at the hardest time of year to birds gathered from the surrounding area. But looking beyond the hedge, their presence seems like a miracle in a landscape dominated by fields several hectares in size. It seems clear to me that if this hedgerow was not here, these birds would not be here either. Nor would the Linnets, whitethroats or occasional sparrow that appear in spring. The butterflies and moths that flit out of the grass would find no peace without it. This place would be poorer.

But the Corn Buntings, I'm so pleased they're here, have a look at the recent BTO atlas data to see why. This spring I recorded 6 singing males in the vicinity of the Hedge. I hope they'll still be there next spring.

Leaving the hedgerow, the way back takes me along the top of a shallow valley. Another hedgerow grows here but its condition is not great. It is slumped and gappy and held together with bind weed in places, still, better it be there than not. Having walked its length, I turned down the path to the ever creeping commuter village. From the top of the field I can see the cheap new housing estate where the high school playing fields used to be. I noticed one of the houses has put Christmas lights up already. They flash blue and white like its some kind of emergency.

Foot note:
I wrote this two weeks ago and never got round to posting it but it seems rather apt now. Since then the 2013 State of the UK's birds report was published and some headlines can be seen here. It makes harrowing yet tragically familiar reading, particularly for farmland birds like the Corn Bunting. In addition we will find out imminently what impact the Common Agricultural Policy reform will have on farmland birds, in particular how much money goes towards wildlife-friendly farming. Although the government doesn't get on too well with scientifically-backed evidence, there can be no doubt that these are critical times for our wildlife and I sincerely hope that message gets through.

Just as I was leaving the house yesterday and going through the morning ritual of brushing my teeth whilst watching the garden from the back room, I watched a Collared Dove fly in and land on the lawn. Turning away for a second or two, the next thing I saw was a cloud of feathers and this quite awesome female Sparrowhawk (Accipiter nisus) breakfasting on an unfortunate Collared dove:


She stayed for over half an hour, plucking and consuming her meal before taking off with the remains. The power and stealth was spectacular. 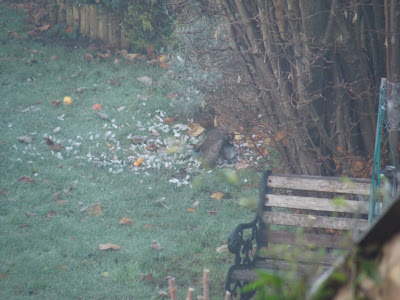 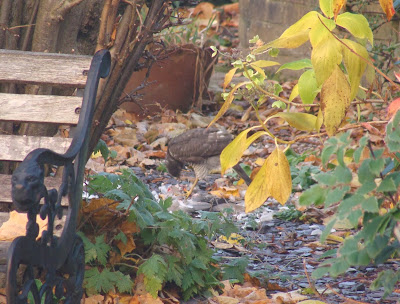 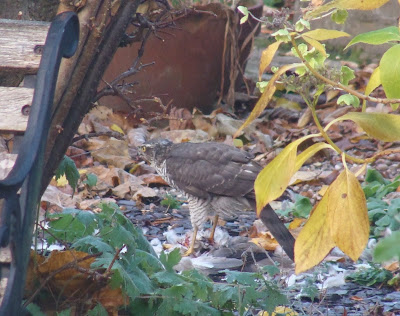 Some photos of a superb Black Redstart (Phoenicurus ochruros) that was found in Southwark (Central London) today: 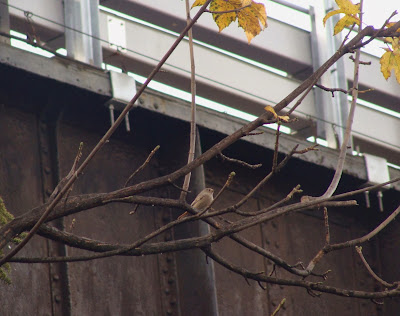 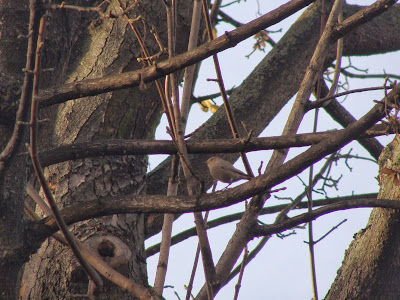 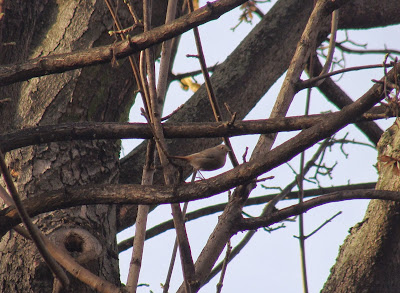 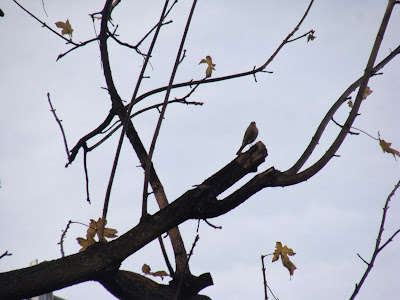 The bird was spotted at lunchtime in a small, private car park where it showed nicely for 45 minutes. It was actively feeding on small insects in a tall Sycamore, often climbing the steep, brick railway embankment to forage out of sight. I love these birds and it's always nice to find one in London. This bird was only a few hundred metres from where I observed a singing male in May this year. Uniformly mousy grey, it was pretty hard to determine much in the field but I think it's possibly a 1st winter male.

Some good info here on this iconic London bird. 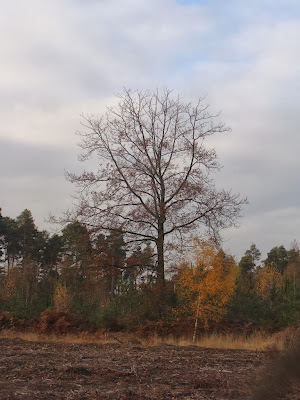 For the last month at least, this bare and slender oak has been acting as a magnet for numerous parties of Crossbills at Hemsted Forest in mid-Kent. They can't seem to get enough of it. Recently these roving flocks were discovered to include three crossbill species, the Common Crossbill and (now) individuals of the much scarcer Scando-Russia migrants, Two-barred and Parrot. The irruption of the latter two species in Britain this autumn has meant its been possible for myself and many others to get good views of each (and for the first time) - but there can't be many places where the three species have regularly gathered in the same tree!

After a rainy and fleeting encounter with the Two-barred Crossbill last month, I was looking forward to another visit so headed back down to Hemsted today. I had a great few hours on the site, with the stony sky eventually breaking into pale sunshine and a muted wintry blue. It was much quieter than my previous visit, but again the birds made frequent visits to 'the Tree' - the arrival heralded by their calls swirling around the clearing. First up today, the male Two-barred Crossbill appeared in a flock with nine Common Crossbills, immediately identifiable by its bold, white wing bars. Just as before, it struck me as a really smart bird, a real bubblegum beauty. On its second visit to the tree about an hour later, it was possible to separate its softer call from the common flock which added to the experience. Whilst watching the Two-barred, I had been checking the other crossbill's, er bills, for any that would indicate Parrot but drew a blank. The variability in form was quite marked but eventually a single crossbill flew on its own. This in itself seemed interesting and decent views of its chunky head/neck and bill were good enough to confirm it for me as a Parrot Crossbill.

During a couple of hours, the Tree was also visited by a flock of 25+ Siskin and a couple of redpolls, while around the clearing, Redwing, Woodpigeon, Coal Tit and Goldcrest were all present. But today was all about a unique encounter...I reckon I'll be hearing crossbills in my sleep tonight. 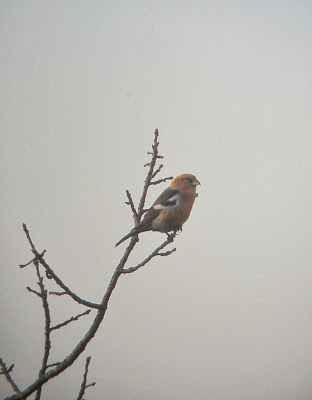 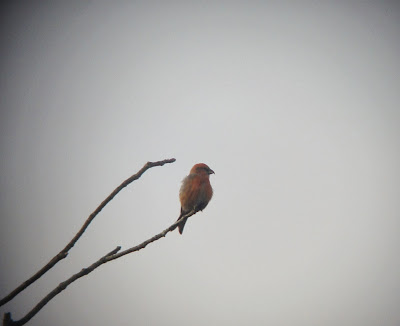