Nunhead Cemetary, 0840-1005 (grey cloud, mist, mild, no wind)
Results:
Blackbird 14, Blue Tit 26, Carrion Crow 18, Chaffinch 6, Coal Tit 1, Great Tit 15, GS Woodpecker 5, Jay 1, Long-tailed Tit 5, Magpie 18, Ring-necked Parakeet 13, Robin 9, Wood Pigeon 24, Wren 11.
The misty conditions made this morning’s walk around Nunhead Cemetery quite eerie at times! Observations from today: smaller birds were all recorded in decent numbers (especially blue tits) although the absence of Goldcrest might be an early indication that our smallest bird has struggled with the exceptionally cold December. Great-spotted woodpeckers were conspicuous throughout the wood and a small flock of noisy chaffinches was active in one of the glades. There is a great deal of dense ivy covering trees throughout the site; this will provide useful shelter for small birds in the coming months. There are few trees or shrubs with any berries left now and most of the feeding activity I witnessed was centred on the seed clusters of Ash trees.
Posted by Peter at 12:16 No comments:

Yup, it’s true...as if a blog wasn’t exciting enough you can now follow my birding exploits via twitter! I was a little sceptical at first but my PR advisor (who knows about such things) has repeatedly sung its praises. Turns out it was good advice, it’s quite good fun. So for as much bird-related fact and frivolity that can be reasonably described in 140 characters or less, click here.
Posted by Peter at 13:34 No comments:

In the popular carol, the 12 days of Christmas are celebrated through recollections of extravagant gifts lavished upon one lucky girl by her ‘true love’. On the second day of Christmas (December 26th) the young lover is the recipient of two turtle doves. Of course it’s only a story, but the truth is you’d be you’d be lucky to see this bird in 2011. Numerous articles this year highlighted the sad plight of some of Britain’s farmland birds, Turtle Dove included.
Turtle doves are a late-Spring migrant to the British Isles where they typically breed among the hedgerows and pastures of arable farmland. However, their numbers are reported to have fallen so dramatically in the last few decades (an 88% decline since 1970 according to the RSPB) that they are now a UK BAP Priority Species. Like other species, including Kestrel, Lapwing and Tree Sparrow, its fate is intrinsically linked to widespread changes in the British farming industry. As a bird that survives solely on certain types of seed, land intensification and herbicide use appear to be the main threats to its survival. Persecution on its migration routes (particularly on Malta and Cyprus) and conditions in its West African wintering grounds may also contribute to this decline.
Whilst researching this post I came across this in-depth article from BirdGuides on the subject. Look at the title…great minds and all that!
Posted by Peter at 19:25 No comments:

Where are the waxwings?

By all accounts it’s been a good year for waxwings. These winter migrants are typically found in greatest numbers in northern Britain and along the east coast, but various sites are now reporting sightings throughout London’s suburbs. As far as I can tell, however, Lewisham is still waiting!
These interesting maps from the BTO show how reported Waxwing sightings (indicated in red) have shifted from north to south in the last 2 months. It is thought that this is a response to increased competition for food sources in the north as a result of the severe weather.

I’ve not had much time to get out this week but these distinctive Scandinavian invaders are worth keeping an eye out for. An unmistakable pinkish-red crest, black mask and colourful wing markings make them easily identifiable.
The appearance of large numbers of birds in the UK this year (the term ‘irruption’ is often used) is thought to be linked to a shortage of food in their normal wintering grounds. They feed predominantly on berries and surprisingly, it is said, one of the places they are most frequently seen is supermarket car parks! This is due I suspect to the practice of landscaping urban areas with ornamental trees and hardy, native shrubs such as Hawthorn. Suddenly my next trip to Tesco sounds all the more appealing!
Posted by Peter at 16:01 No comments:

A few more bird sleeves courtesy of Ben who dug these up at the Music & Video Exchange in Greenwich. Thanks! These are, quite literally, birds on 45: 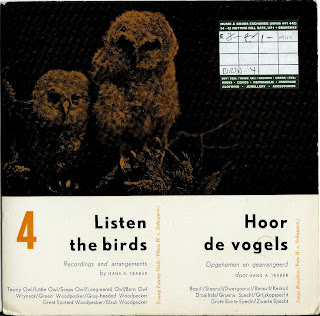 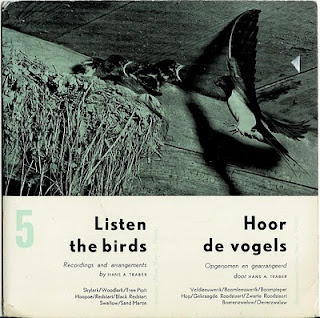 It appears these records were the result of collaboration between the RSPB and the Dutch Society for Bird Protection at some point in the 1970s. These items are numbers 4 and 5 in a range of 12 records that contain field recordings of some of the most common birds in Britain and the Netherlands.
The recordings, made by one Hans A. Traber, are of surprisingly high quality. But what makes the records all the more endearing is the fact that, as well as recording birdsong, the tracks also capture fragments of other background sounds too. The liner notes for the Swallow recording (track 7- disc 5) describe the scene thus “this song was recorded when the bird was perched on a telephone wire in a farmyard, so that we can hear cocks crowing, men walking about, cows mooing and, in the distance, crows calling”. A charming scene I’m sure you’ll agree.
Disc 4 covers the calls of numerous owl and woodpecker species (an interesting inclusion of which are those of the Grey-headed Woodpecker and Black Woodpecker, two species that are not found in Britain). For Scops Owl, the liner notes poetically describe other owls calling in the distance “almost like echoes”. I can’t find any other information about Hans Traber but I find myself quite fascinated by how the process of field recording works. He certainly knew his stuff. 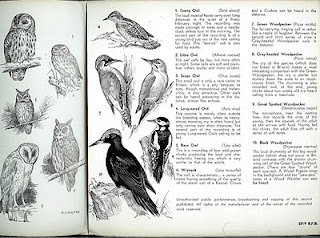 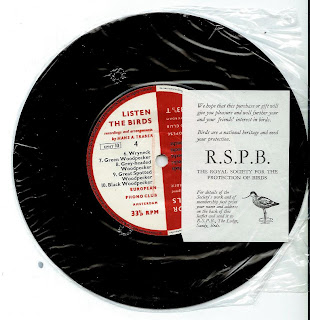 They are quite lovely items, although I can’t imagine them piled high at too many record stores around the country at the time!
Finally, despite it being an LP, special mention should be made to this cover recommended by Lindsay. I’m not especially familiar with the work of Bert Jansch but with a cover featuring Avocet, Kingfisher, Lapwing and an Osprey, it must be a winner!
Posted by Peter at 18:57 No comments:

Photoblog: Out and about (November 2010)