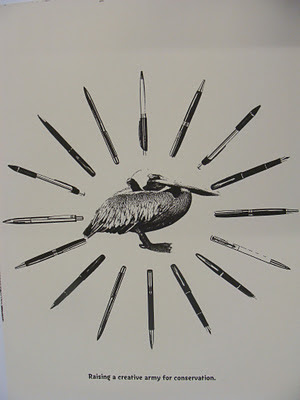 I guess I've never really considered that art and conservation might make a good pair; that art could lead to a real, radical change in the way conservation is approached (and the public's awareness of it) I've stood and admired the work of Constable, Cole, Adams et al and marvelled at the depth of their landscapes, their unique and powerful interpretations of nature. But I find there is little connection with the present. The amazing Ghosts of Gone Birds exhibition was different and I was blown away when I made it along for the penultimate day last Monday.

Although Gone Birds, an art event inspired by BirdLife International's 'Preventing Extinctions' programme, primarily addressed bird species we have lost, it was undoubtedly about the here and now; the uncertain future faced by thousands of bird species. The works on display, submitted by a range of artists from across the world, using numerous forms of media, featured a bird that is now extinct. They were by turns colourful, odd, bleak and even amusing. But rather than dwell on nostalgia and what we've lost, each piece managed to establish a personal connection and a sense of something like...hope?

Combining art, music, design, debate and social media, the organisers have done an incredible job bringing this to life. Everything about the exhibition had been thought about carefully and I think it was a nice idea to allow photography throughout. They understand the need to share the mission and that pictures, paintings and photographs are a good way of doing that. Forget copyright, we've got bigger things to worry about. Here are some of my favourites: 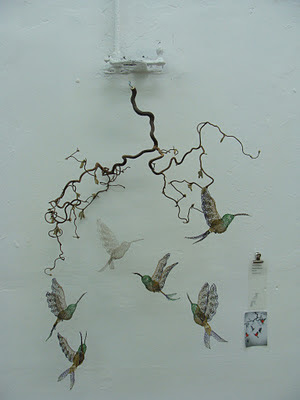 ﻿ ﻿
One of my favourite pieces was one entitled 'Atitlan Grebe' by Chris Rose. It was a slightly stylised painting showing the grebe as glimpsed through a parting in the reeds. Alongside such bold and distinguished company it was perhaps easy to miss but something about it really struck me. He perfectly captured the uncertainty of this birds future. The grebe's head is cocked slightly towards the observer, it is cautious, weary...its fate resonating. The last Atitlan Grebe was seen in the wild in 1989, after suffering catastrophic declines due to use of gill nets, invasive fish species and habitat damage.

The final room in the makeshift gallery focused on a subject that is close to my heart - the tragic, senseless killing of migrating birds taking place in Malta every year. Spread out on the floor, marked in hazard tape was the shape of a bird. In the centre was a heap of spent bullet casings and surrounding this - dozens of photographs of shot birds. Wounded, dead; harriers, bee-eaters, wheatears, herons, storks, cuckoos and more. The photographs were taken 4 weeks ago when members of Gone Birds visited Malta.

As well as highlighting BirdLife's campaign there, this room was an example and a reminder - extinctions are not just a thing of the past, they are happening right now, across the world. Future extinctions. Out into the London cold several hours later I felt pretty drained, but in a way kind of energised. Gone Birds is a rallying cry to the horrors and injustices facing birds across our planet as estuarys are swallowed up, forests torn down, farmland raped and oceans plundered.

Although this exhibition has ended I hear there are plans for it to tour sometime. Perhaps opportunities to go international. Whatever, it's just the beginning. C'mon, get etching!

"Psst Pete...I think there's a Ring Ouzel on the lawn!"

These were not the first words I expected to hear when I walked into the kitchen on Thursday morning but sometimes you're just in the right place at the right time.

My housemate Simon was when he spotted the Ring Ouzel hopping about on our front lawn as he made breakfast last week. It was brief, there and gone in a minute, but unmistakably an adult male. I managed a hurried photo from the smeary window, seconds before it flew off - you can just make out the distinctive white cresent across its breast:

The appearance of this ‘upland Blackbird’ corresponded with similar appearances of migrants along the coast on Thursday – perhaps a result of steady southerlies holding up their migration south. Ring Ouzels are a spring visitor to the UK where they primarily breed in the steep, craggy valleys of northern England and Scotland. However, this late in November, this bird was likely a Scandinavian migrant. Although regularly recorded on passage in north Kent, Ring Ouzels are red-listed in the UK as a result of severe population declines.

I don't know whether it's THAT strange name, famously noted by Shakespeare who wrote of  an 'Ousel cock, so black of hue...' in 'A Midsummer Night's Dream' (he was referring to the more common Blackbird - the Ouzel's nearest relative), or the fact that Ring Ouzel's are by nature shy, secretive birds of upland areas - an environment that is itself mysterious and evocative. But it's a bird I've always wanted to see. I never thought I'd be able to do so from the comfort of my kitchen.

Or a walk along the East Fife Coastal Path, 5-6th November 2011
It seems like a dream now but last weekend’s trip to Scotland for Hottloggz, the annual Fence Records shindig, had many highlights. Sure there was the music and the fireside sing-along’s, an unlikely quiz night victory and the afterhours church hall disco that got shut down by the local coppers; but I couldn’t go to Scotland and not squeeze in some birding. That would be plain foolish.
Before the festivities on the Saturday, Ben and I made the short walk from Anstruther to the neighbouring village of Pittenweem. The first bird we came across was also a first ever for me – a pair of Eider sheltering in one of the bays. These distinctive birds were conspicuous all along the coast, small numbers here and there and larger flocks moving off shore. Having ashamedly neglected Scotland for some time it was nice to finally see these striking birds. Who said ducks are boring?
The rocky coves harboured a nice variety of coastal birds: Ringed Plover, Curlew, Dunlin and Redshank in varying numbers. Cormorants held court on exposed ledges and at one point were visible alongside a pair of their ‘northern cousins’ – the Shag. It was nice to see these two classic confusion species side by side; Shags showing an obvious forehead/crown and being the slightly smaller, more ‘wiry’ of the two. From the path, we had numerous passerines, with the outcrops of gorse and scrub holding Lesser Redpoll, Meadow Pipit and Linnet along with the usual tits and finches.
Arriving in Pittenweem we found the harbour alive with the sound of gulls and the throaty humming of Eider. But the real action was in the sky as hundreds of Pink-footed geese circled the village in ragged yet seemingly coordinated streams. It was a glorious spectacle, stopping people in their tracks and repeated throughout the weekend. 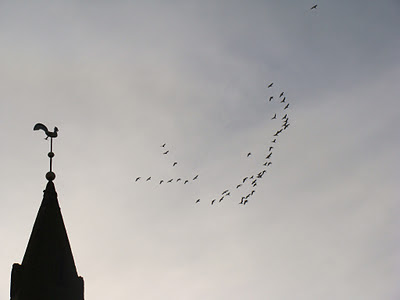 Divers were my mission on Sunday as we stumbled out of the B&B, blinkingly into the sun. We took the bus up the coast to Crail where we rejoined the path heading back to Anstruther. A distant low shape off Crail harbour looked possible for a Red-throated loon but I can’t be sure. Choppy waves and bright sun made the mission difficult. A bit further along though, we caught up with three guillemots in the water - always a nice spot in my book.  Rock pipits and Pied wagtails were frequently encountered along the path as we headed for Anstruther. Nearing a pig farm I spotted a raptor perched on a fence post. This turned out to be a Common Buzzard that was later joined by another. In the same area a Kestrel was hunting while a Mistle thrush and hundreds of starlings poked about in the mud. Leaving the path and heading into Cellardyke, a male Sparrowhawk was darting between the chimneys.
Hot Damn. It was a great weekend.
Links:
Walk here - Stay here - Eat here
Posted by Peter at 21:32 No comments:

﻿﻿﻿﻿﻿﻿You can't beat a blustery coastal walk in October. Here are some photos from my latest trip to the Swale National Nature Reserve on the Isle of Sheppey. I really love that place.