A Scops Owl calling along a forest road during a nocturnal survey last night:


It's not often I have them so close. I had no other means of recording it other than my camera. Riveting footage, yes?

But is it one owl or two?

Cyprus Scops owls have a two-note call so although it sounds like two birds a lot of the time, it's likely to be just the one. It sounds like they're answering themselves. The new Sound Approach book on owls (which is great, as ever) describes the cyprius Scops Owl call, specifically the second 'answering' call or 'bip' being "the rule and very audible" as opposed to it occurring in other scops owl sub-species at 'low incidence' or only being heard quietly or at close range.

So in this audio example, the single bird is easy to record accurately but when there are six or more calling at the same time with the double note, like in Pafos Forest recently, it gets interesting!

Yesterday evening I walked out over the salt lake, its vast edges now a smooth surface dusted with salt crystals, in places it cracked under my feet like a freshly baked cake. A few rubbery plants still poked through here and there in remarkable defiance of the conditions. A few weeks ago the water would have been past my ankles here but the unrelenting heat and wind has drawn the lake backwards to a remarkable degree, a hundred metres or more, so far that birds disappear easily into an oily haze and counting them would be impossible any other way.

Under a glaring sun a few Black-winged stilts headed my way shrieking in alarm and way beyond them a rippling off-white smear over the lake marked the massed ranks of greater flamingos - one thousand three hundred and forty two of them I recorded a little while later.

That the water retreats so much is not surprising given the heat now, but I have also found that Akrotiri is one of the windiest places I have ever been. The peninsula, a thumb of land welded from sand, mud, shingle and sun-scorched rocks, seems barely an inconvenience to the Mediterranean and its prevailing winds pass across as if it were not there.

Other little changes have slowly revealed themselves. I first noticed it last week when those same winds materialised a common tern on the salt lake from somewhere, a bird far scarcer here than in North Western Europe. The same evening, a large roost of adult yellow-legged gulls appeared and set about causing consternation in the kentish plover colony. But yesterday a check on the kentish plovers in the gravel pits also sent a pair of green sandpipers noisily airbound. Unlike the plovers, their breeding range lies much further north so it seems these birds were already headed south – an indicator that migration has started again and the avian calendar has already turned a new leaf in its seasonal spread.
Posted by Peter at 14:37 No comments:

(But I nearly missed it)

In fact, were it not for the sudden darting movement from an upper branch of the pine tree I would've carried on past. Instead, I glanced up in time to see a Spotted Flycatcher picking its way down the tree, branch to branch as if it were descending a ladder. In the late-afternoon gloom of the forest, a spiky monochrome canopy against the sky above, it paused before sallying to an adjacent tree. Following its direction I realised it had alighted at a nest, a small, bushy cup bound with lichens and strands of webs fixed to the side of the trunk. The bold location for something seemingly fragile was a surprise, on a better day it would be just feet above oblivious picnic-ers on the tables below. It would certainly be a treat for any passing Jay or suchlike. But maybe it's a case of hidden in plain sight?

A female was sat snugly on top, a shifting blend of streaked grey or brown that suitably matched the surroundings but so far from plain as to be rather beautiful. The male tended to her as several blind, beaky tufts peeped up from beneath. I watched this little scene contentedly, the rest of the wood, the rest of the world, faded out for a few minutes.

I was reminded of this encounter at the weekend when I read in the news today that nearly 20% of bird species are considered to be at risk of extinction across the European Union. What a tragedy.

Whilst my main role in Cyprus has been to collect field data relating to breeding and migrating birds, I have also been working on a project of my own. This investigates the hypothesis that the further I actually I am from home, the more successful Arsenal are. After assessing two years of data now, the correlation is a positive one. On cup final day last year I was attempting to find phone reception on a hilltop in the Outer Hebrides when we finally wore Hull down. This year, c2400 miles to the South East, in another distant corner of Europe, I found myself counting cattle egrets on a lake somewhere on the outskirts of Famagusta as the players ran out at Wembley. The greater distance involved clearly worked in our favour as we won 4-0. There may be some other variables to consider but a spring trip to Mongolia next year might just see us win the league.

So despite kind efforts I missed the cup final again this year. Instead I settled for a cold Efes, a Turkish TV drama and the sound of cicadas as I headed into North Cyprus with a few others to conduct the annual count of seabirds on the remote Kleides Islands at the very tip of the Karpas peninsula - the ‘pan handle’ of Cyprus.

En route we checked an area of seasonal wetlands on the edge of Famagusta’s ugly sprawl to find the spectacular cattle egret colony in full swing. Emerging from the murky water, bare, skeletal tamarisks sagged under the weight of nests, their spiky, feathered contents spilling this way and that. I counted a good number of chicks, some mere balls of fluff buried under similarly fluffy siblings, others clambering awkwardly in pursuit of newly returned adults. I watched one feeding its young and winced at the eager pulling and smacking of their bills clamped against the adults'.

Reckless coastal developments render the road to the Karpas forgettable until it veers in land and the undulating Mediterranean landscape of farms and villages reappears. It was a relief to leave the coastal strip behind, the unappealing holiday villages, the empty shops and scruffy parking lots. It's hard to fathom the process, or lack of, that continues to result in places like this. Worse still are its infections into the Mesoaria plain, the sweeping arable 'basket' of the North...the sight of an abandoned shopping mall next to the shell of a 15-storey hotel, surrounded by fields of wheat, is the most ludicrous of all. 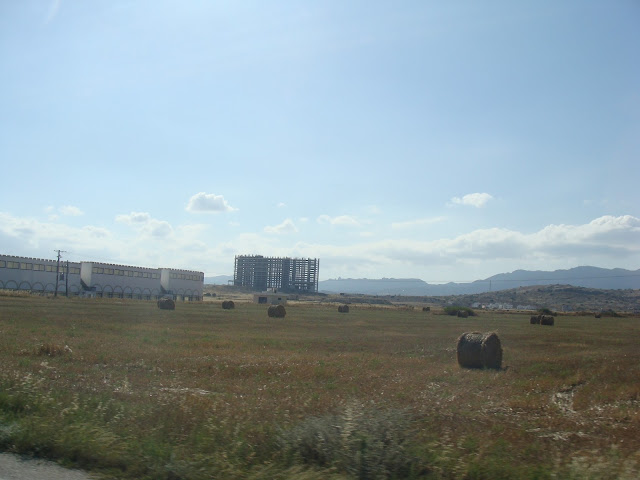 But further east, through Karpasia and past the last village, things improve. Pockets of wheat, fringed with the spiky purple heads of donkey thistles fill the narrow valleys, while small stone huts seemingly as old as the hills lie scattered between them. Old shepherd's huts I assumed, but in fact they were drying sheds for the tobacco that was once grown here. Over one such field we marvelled at the sight of six eleonora’s and two red-footed falcons dismantling insects on the wing.

The Kleides Isles are inhabited only by seabirds and inaccessible from the mainland so a fisherman kindly took us out in order to complete our surveys. Most important among these is the small breeding population of Audouin’s gulls (the most easterly in Europe?) and Mediterranean desmaresti shags. Both are typically outnumbered by Yellow-legged gulls and on our visit so it proved. Thankfully the audouins remained largely stationary as I checked numbers from the lurching boat. Aside from the gulls and shags we also spotted several little egrets, a peregrine and a flock of swifts wheeling around one of the many caves. The strangest sighting of all though was found on the very last rock, the most easterly tip of Cyprus...a roosting Spoonbill, perhaps contemplating the final leap across the sea to the wetlands of Turkey or beyond. 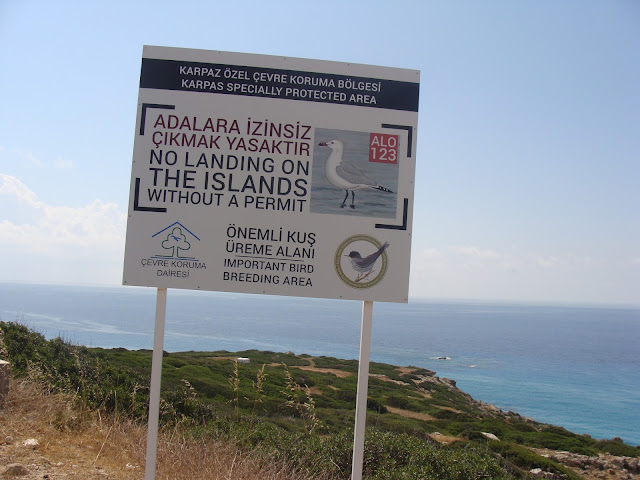