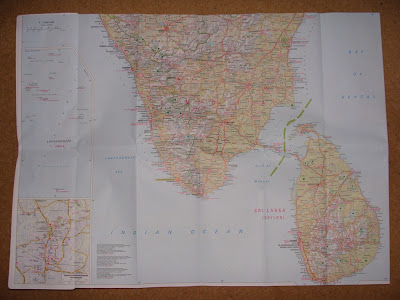 No updates for a while...see you in March!
Posted by Peter at 10:03 No comments:


As I mentioned in a previous post, one of the highlights of a trip to Elmley Marshes recently were the great views of a flock of Ruff (Philomachus pugnax) feeding along the entrance track. Scanning through the birds, I spotted two colour-ringed individuals - the photo above is a record shot of the one nearest me. It's not a great shot but you can make out some detail of the rings, in this case: yellow-top/white?-below (left tarsus) and blue-top/white-below (right tarsus). I'd heard about wader ringing programmes in northern Europe before and a quick check online, via the excellent www.cr-birding.org, pointed me in the direction of Jos Hooijmeijer at the University of Groningen in the Netherlands. I sent him this photo and he was good enough to fire an email straight back.

Jos instantly recognised this bird as being from an affiliated ringing programme and this is the information he sent. This is a 3cy male Ruff, first caught and ringed on the 3rd April 2012 in Gaastmeer, Fiskersbuorren (Netherlands) in the vicinity of Lake IJsselmeer. It subsequently moved south west to Gent in Belgium to what looks like an area of well-drained arable land, where it was first spotted in December 2012 before travelling due west across the channel to Sheppey:

The arrival on Sheppey seems to correspond with freezing conditions across north eastern Europe and south eastern England has thawed nicely since then so Sheppey would seem a good destination.

Anyway, always interesting to find out where birds have been - looks like another cold snap this week, so keep an eye out for more continental arrivals.
Posted by Peter at 20:38 No comments:


Or a good example of how not to be a wildlife photographer.

This Barn Owl that appeared on Staines Moor yesterday was just one of many highlights on a memorable trip out to West London for our 'Office Patch Swap'.

The only rule of Patch Swap is, there are no rules! Only that everyone has a great day birding around someone else's local area. Our first stop yesterday was South Ealing tube station, Richard's manor, to pay a visit to London’s most reliable and thus most papped waxwings. True to form, they were there – 14 birds loitering conspicuously in a tree by the bus stop as they have done for 35 days now. Are they waiting for the bus back to Scandinavia perhaps?

At Staines Reservoir we were exposed to the elements but rewarded with excellent views of a Great Northern Diver. It was an evasive bird but a wonderful brute. Doing what a diver does best, it would come up for five seconds and then disappear under the choppy waters for twenty, popping up 100m away. That is some strength. It kept us fit but it was worth it.

From there it was to Staines Moor - a truly unexpected and undisturbed slice of wilderness, a precious alluvial grassland, a  SSSI, hemmed in on all sides by Heathrow and the M25. It was a strange feeling, heart and mind wanting to surrender to it but prevented from doing so by the constant hum. Nevertheless, as we wandered among the ancient anthills all afternoon, its nature slowly unfolded and the noise was easier to forget. We had wonderful views of a another wandering spirit, a Short-eared Owl, quartering the moor at dusk until it alighted on a bramble perch - its fiery eyes so weary and watchful. I shared this view through my scope with a passing dog walker who was thrilled. I think she'll remember that day she saw an owl.

There was more of course, that afternoon, but the story is much the same. The next office patch swap has a lot to live up to! 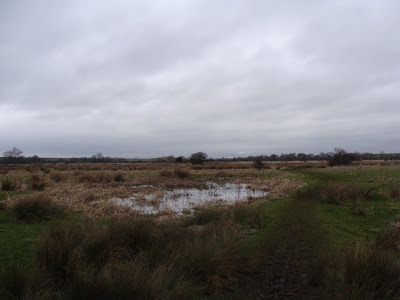 Thanks to Rich, Vicki and Dan


This photo was sent to me by a family friend recently, apparently the road is called 'Water Street'...I know!

So today is World Wetlands Day - a virtual hands up who knew that? Ah maybe you did, maybe you didn't...the main thing is you do now. It marks the day in 1971 when the Convention on Wetlands of International Importance was signed in the city of Ramsar in Iran. What we now know as the Ramsar Convention has since taken massive strides in highlighting the importance of wetlands and shaping how they are conserved around the world. This year the theme is water management.

Writing this now from a hilly and residential South London suburb, wetlands seem far removed from everyday life. But those marshes and mudflats at the mouth of the Thames and those rivers and reservoirs threading through the wider landscape, allow us to live much as we do. They are alternately a sponge, soaking up the power of the high-energy waves and the vagaries of inclement weather; they are a fundamental and free-flowing source of hygiene and survival, they are simultaneously a natural drainage and storage system. They are many other things too.

As well as our reliance on them, wetlands are also unique and fantastically biodiverse habitats, home to a bewildering number of flora and fauna species and used by many more. I spent today doing my best to share the joys of one such place in West London, or at least, giving the punters what they wanted and showing off some pretty birds.

Kempton Nature Reserve is a relatively new reserve, created in the last decade of so by Thames Water. As a former working reservoir, water is the influencing force here and through time and careful management, a charming, rich mosaic of habitats has formed. Today we saw Reed Buntings flitting over a reedbed and a handsome Gadwall bobbing like a cork as it dabbled in the velvety blue pools. A Snipe did nothing save cast a shadow as it froze on an island to avoid detection. A Kestrel flew in and began hovering over one of the muddy banks, keen eyes looking for invisible trails or the twitch of a mousy tail. At one point the hide was full of kids and I asked them what they could see, "SWANS!!", "FISH!", "DUCKS!" were the answers yelled back at me. It was cold and overcast and February, but the place was still full of life...and I guess that's ultimately what World Wetlands Day is about. As photos like that at the top and recent news articles show, it is vital that sensitive wetland management is taken seriously by politicians - so much depends on it.