A quick twitch before work

Well, I say twitch, it was certainly one of the more relaxed in that category, but needless to say I took a detour to work this morning, popping into Hyde Park in central London for a look at the two Bearded Tits (or Reedlings) that have been present for some weeks now. Now obviously they're not a rare bird in the grand scheme of things, but a first record for inner London is worthy of note and of course, they're always cracking little birds to see. It's even more remarkable considering their temporary home is a thin strand of reedbed adjacent to a main path of a park filled with runners, dogwalkers, people running with dogs, dogs walking themselves and the odd hundred tourist looking for Princess Diana. But as ever, it shows that if the place is right, nature isn't fussy. The birds were apparently giving the kind of views that would shame a Buff-bellied Pipit, so it was also an opportunity to appreciate the birds at close quarters rather than as the fuzzy little shapes pinging through reedbeds so often encountered. 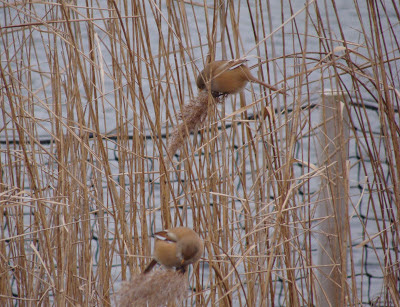 The birds were also feeding on the ground at the base of the reedbed, not more than 4ft from me, but protected by a small park fence which caused havoc with autofocus:


Best to head elsewhere for what I'm sure will be stunning professional shots but hopefully this gives some impression. The birds, both female, have been ringed and close observation of better photos than these has been able to confirm that this took place at the RSPB's Rye Meads reserve fifteen miles or so north of here in November 2012. That's another fascinating aspect to these birds' presence - given that the wandering instinct of bearded tits is rarely mentioned or, I imagine, successfully monitored. As I watched them waddle around among the leaf litter like fat little hamsters with stiff, pointed tails I almost forgot where I was supposed to be going...