Things have been a bit serious on here of late and since this post has been gathering dust on the bedroom floor for a while, I think it's about time I gave it a spin...here's another pointless tribute to birds in vinyl cover art:


There was a time when Jade Tree Records ruled the world. It was one of those labels you trusted cos there were rarely surprises; every song was about that girl you kind of liked but were too useless to do anything about, and the illusion of comfort that provided was...comforting. Mostly it was just fun pop-punk with a bit of 'post-hardcore' or whatever you want to call it thrown in and dressed up smart, which is great when your teens are crashing around you and you have no idea what you're doing in a small midlands town. Most of those records faded from my memory pretty quickly but this one hangs on - in no small part to its beautiful cover art.

It looks great doesn't it? I was chuffed to find a copy the year before last because I'd forgotten how good it was. I'm sorry to say I can't find the artist to credit but I've always thought it pictures a (Lesser) Yellowlegs, although I could be wrong. It also happens to be a really good album. After years of punching out classics in Jawbreaker (I knew I'd get them in this blog eventually), Blake takes it easier here and his voice sounds good.

Now quite literally 'jetting' to Brazil, feast your eyes on this wondrous behemoth of birding vinyl cover art lunacy, uncovered by my friend Lisa in New York  last year:

Step up and take a bow Ney Matogrosso.

I would've loved to have been present in the boardroom of Ariola Discos when he discussed his modest plans for the sleeve of the record: "well I thought I'd keep it simple y'know - just my head suspended over an illuminated city scape and a Harpy Eagle emerging phoenix-like from my forehead while spotlights spell out my name in the night sky above".

A HARPY EAGLE. I love this guy. I would dearly love to see a Harpy Eagle too - the huge monkey and sloth-eating raptor of South American rainforests, it's right up there on my bucket list.

And, I wager, the tunes contained herein are actually not all bad either - if soulful, upbeat Brazilian pop music is your bag. He has an obviously striking voice and lends it here to a number of songs veering from smooth teen balladeering to jaunty gypsy-type folk and one or two that sound like theme songs from a 70s Brazilian TV sitcom (if such things existed). The easygoing vibe is reflected in the pastoral imagery of song titles such as 'Viajante' (Traveller), 'Mata Virgem' (Virgin Forest) and my favourite 'Folia no Matagal', which apparently translates literally as 'revelry in scrub'. YouTube it, he's quite a showman.

Fresh from unearthing that gem, Lisa also came back with this soundtrack LP of birdsong from North America. It might be cheating to include it here I suppose, but it still ticks all the boxes. Cover-wise, a gull is the star; I know little about gulls across the pond so I perhaps won't hazard an ID guess here but feel free to comment below if you're desperate.

While essentially an album of recorded 'birdsong', the sub-title 'Environmental sound experiences' sums this up best. Rather than being a series of track-to-track excerpts, here the pioneering sound-recordist and producer Dan Gibson lets nature unfold in real time, with minimal editing to spoil the experience as he paddles around the streams, lakes and falls of Niagara. Check out this sleeve photo of him with his 'specially designed stereo parabolic microphone' in his canoe: 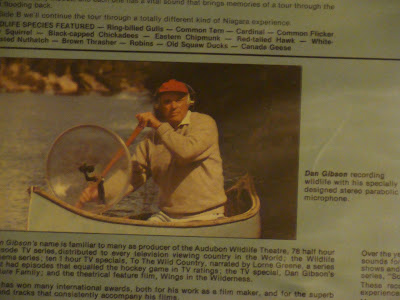 What a cool guy.

Among the species featuring here are Ring-billed gull, Black-capped Chickadees, White-breasted Nuthatch, Brown Thrasher, Northern Oriole, Song Sparrow, even American toads. All the hits. I like the poetic tone of the sleeve notes too - 'Soon we are right alongside the staggering cataract' he writes as he passes the storm of water at the base of the falls, before opting for more seductive fare:

'Meditation is a method of relaxation that doesn't come easily to everybody. We need help, a stimulus of some sort, a trigger...Side B might do it.'

Liner notes: thanks to Lisa A