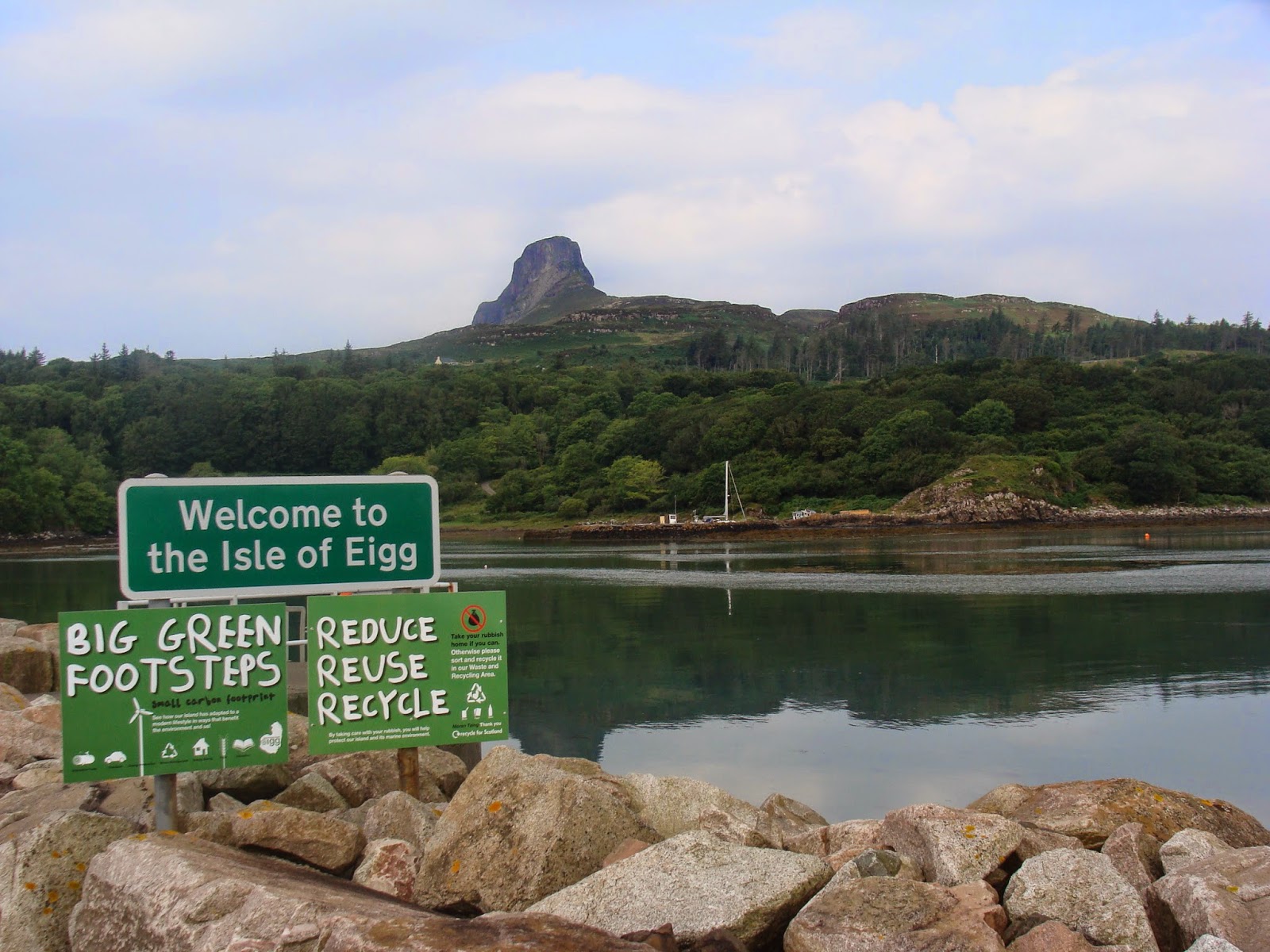 It seems that barely a month passes these days without me visiting some achingly beautiful corner of Scotland, this was my fourth trip in under a year; how I've grown used to the unnerving jolts of sleeper carriages in the night and the efficient hum of CalMacs. So it was this weekend as myself and a few others headed north once more, this time to the majestic Isle of Eigg, nestled between Rum and Mull on the west coast. Unlike previous trips, wildlife or wilderness was not the driving factor here, in fact 'FUN' (and therefore not necessarily birding) was the party line I was given before we left, rather it was the promise of seeing some great bands, drinking, dancing and generally having an amazing time - all courtesy of the great folk behind (Eigg-based) Scottish independent record label Lost Map Records and the 3rd 'Away Game' mini-fest, this time out christened 'Howlin' Fling'.

And have an amazing time we did. Of course I still found time to explore the island and my surroundings, anything less would be plain foolish. I found Eigg to be a charming place and had a great time birding its heathery slopes and rocky shores between splendid bouts of gaelic rap, glorious noise, swooning, drinking and yes, howling.

Meeting the aptly named Shearwater from the train in Arisaig harbour on Thursday, the hour-long crossing to Eigg bought a scattering of seabirds including singles of Kittiwake, Puffin, Gannet and two Razorbill, while the rocks around around Arisaig harbour hosted numerous common seals. An interesting mid-channel sighting was of a small flock of Golden plovers that arced low past the boat and off to the south west. Nearing the small jetty at Galmisdale, Black guillemots were fairly conspicuous and a few Eider nursed young in the shallow and muddy inner harbour.

Pitching our tents on a low, grassy headland a short walk from the harbour afforded nice views of the Sound where several dozen Arctic terns from a nearby colony squawked and swooped endlessly during our stay. A pair of hooded crows kept an ever watchful eye on the pretty harbour and more than once I heard common sandpipers shrieking somewhere nearby. With the sun out and the music not kicking off until the Friday, we took a walk along the cliffs to the west and a path that led to the Massacre Cave. It was nice to find a single Grayling butterfly here, a species that is largely absent from my local area. Meadow pipits called throughout and a few crossbills and Spotted flycatchers flicked around the pine woods lining the path from the 'village'. Near the cave was a single juvenile Wheatear and a small flock of rock doves. The cave itself was spectacularly eerie, requiring some agile shuffling on knees to access, with the darkness inside lending weight to its reportedly tragic history. But it is a GREAT name for a metal band at least.

With no metal in sight sadly, the Thursday night headline slot was seized by a pod of common dolphins that swam into the small channel by the pier and gave incredible views to those assembled on the little terrace of the tea room/bar overlooking it. They swam and breached down to 20m at times, causing a little crowd to gather in appreciation on the rocks - undoubtedly the best views I've ever had.

Friday started with an hour watching the sound from the new harbour wall with Manx shearwaters in mind. Happily it paid off and, although distant, the distinct low, gliding flight pattern revealed a steady passage of birds and some small flocks gathered on the water. Following breakfast, an assault on the imposing peak of An Sgurr that towers over the island like a sinister basalt dorsal fin was planned and we headed up the steep path to the accompaniment of Ravens kronking overhead. They lurked at the top too as we ate a victorious picnic, gawped at the incredible view, played 'Name that Island' and took selfies (naturally). But aside from the view, the morning belonged to a ringtail Hen Harrier that gave good views as it cruised over a nearby slope. To see these stunning birds on a bleak marsh in winter is special but to see them glide over purple-studded heather on a summer's day in a landscape as right as this is breathtaking.

With some great birds on show, it was perhaps fitting that the lines were blurred somewhat when it came to the festival line up. This is why I spent an hour or so on Saturday watching a Woodpigeon duel it out with a parliament of eagleowls - with the result being closer than you might expect. Then there was an encounter with a WOLF too which wasn't actually the least bit frightening, in fact it was kind of beautiful. It's testament to the organisers' vision and good taste that every band I saw bought something to the weekend and contributed to the spirited atmosphere with simply great performances. Sorry to go a bit Buzzfeed but off the top of my head stand outs included - Sam Amidon, Johnnie Common, The Pictish Trail, Meursault, SeaZoo, Jens Lekman, local band Metta and the two guys playing in the Ceilidh Hall on Sunday afternoon that we we stamped and clapped along too. Look them up. This is how music festivals should be done.

Then all too soon it was time to leave again. There was just time on Monday to cycle down to the beautiful singing sands at the other end of the island where a couple of Whinchats hopped among the scrubby croft margins and some kestrels bounced on clifftop gusts. On a high ledge on the shear rock cliff that surrounded us I'm sure I saw a Golden Eagle alight briefly too. Packed into the Shearwater for the return trip there was a heartwarming cheer for the organisers and residents waving us off before we crossed back to Arisaig. The water was flat calm under the hot sun and quiet as a result but still a couple of harbour porpoises appeared briefly and two superb Great skuas pitched off the glassy sea and flew past. I thought that would be it for the trip but there was one more highlight to come. Sitting sleepily on the train, not far out of Arisaig, I perked up momentarily as the train veered into the open and ran adjacent to a large loch. It was just in time to see a summer-plumaged Black-throated Diver sat on the water! What a beast. It was a blink and miss it moment and it felt quite surreal, but it was a great way to end a fantastic few days. 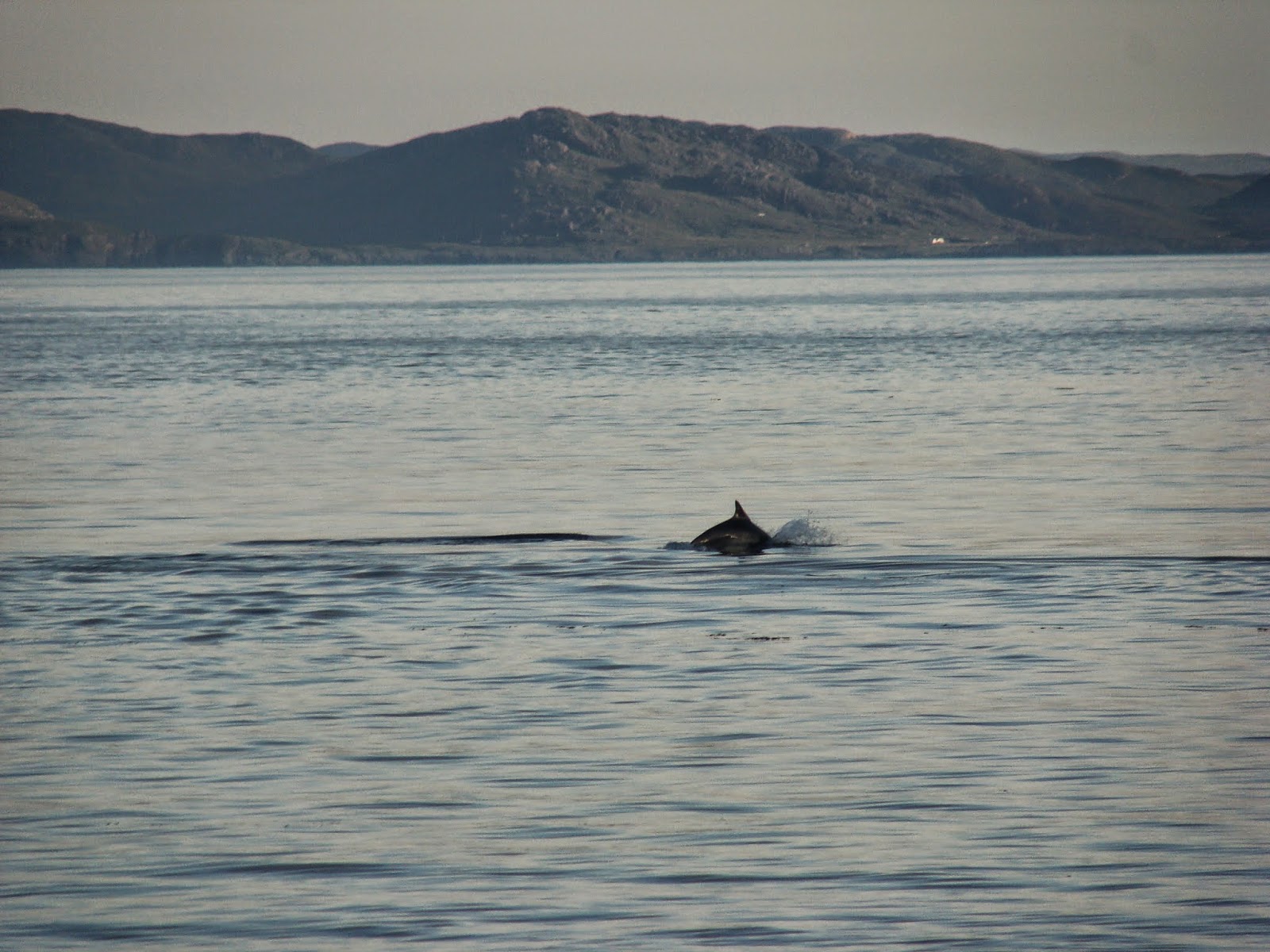 And some footage with bonus great commentary (!):


Thanks to Johnny and everyone. KS, sorry for stealing your joke :)
Posted by Peter at 15:12