Yesterday I took one of my favourite walks out to Egypt Bay and along to St Mary's. There's nowhere else near home I know that comes close to matching to the sense of space there; in a corner of the country rapidly being filled in and topped up with bad ideas, it's remoteness is priceless.

It was bright and calm as I walked down the lane at Clinch Street, the far side of the river was obscured, all except Southend sea front which caught the light and appeared like an island in the estuary haze. I had owls in mind mostly, a Short-eared perhaps or something nice tucked into the sea wall, like a previously undiscovered flock of Hermit thrushes. Not too much to ask for. As it was, I saw no owls and the tide was way up on the sea wall, nothing stirring amongst the heroic, wind-battered weeds and transient strands of litter there. Well almost nothing, a Small Tortoiseshell butterfly briefly spluttered into flight, making a mockery of a November morning in the process.

Along the track past Swigshole cottage, the usual mix of tits and finches flitted about, a few linnets too. A Great Spotted Woodpecker bolted from a willow at my presence before deciding I was little threat and returning. I noticed the RSPB fields behind Swigshole copse have had heavy plants in recently, digging shallow rills by the look of it; hopefully this will improve an area of grassland that was otherwise pretty poor for wading birds. Further along the track, a pair of Marsh harriers, an adult male and female, grappled together in the air momentarily before drifting apart. Overhead a Rook called oddly, a guttural, Raven-esque croak that, scanning around, revealed a third, much darker harrier moving high to the west.

From the old sea wall at the back of Decoy fleet I heard the distinct ping ping ping sound of Bearded tits in the reeds. I spotted a single bird darting for cover in Decoy until a much nearer series of calls took me to the smaller fleet adjacent to the wall. A flurry of movement low in the reeds revealed a roving flock of five birds, 2 males and 3 females, busy stripping seeds from the spongy reed heads as they went. I watched them for a bit and took some footage that probably won't make it on to 'Autumnwatch' (but listen hard and you might hear them calling): 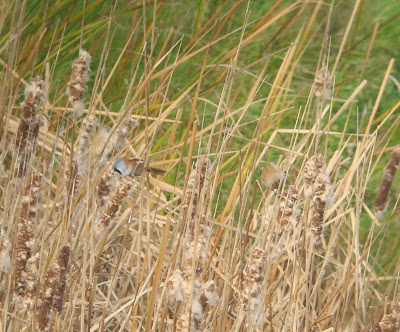 From the same spot I looked over the marshes. In the field behind Egypt Bay I scanned the bramble clumps as I always do, for shrikes, but as always there were none. Three Stonechats turned up though, one being given a hard time by a slightly out of place Robin - an odd bird to see this far out on the marsh so presumably a hungry migrant fresh in. Along the sea wall a mighty roost of Curlews could be seen between the fleet and St Mary's Bay - a sign that the tide was high. I counted 310 birds, no doubt missing a few unseen. On the river was a raft of three hundred Wigeon while a single Little Egret and several Meadow pipits flushed from the thin lip of salt marsh squeezed against the wall. From the wall I picked out a single Kestrel and a hundred or so Lapwing in the fields but the highlight was undoubtedly two winter-plumaged Red-throated divers which flew slowly up river close in.