Wood you believe it...

I got quite a surprise at work on Monday morning when, within five minutes of arriving, I was handed this... 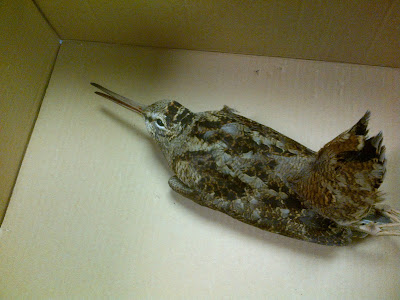 ...a beautiful Woodcock (Scolopax rusticola). It is perhaps more surprising if you know that I generally work in and around central London, an area not normally known for being to home to secretive, ground-dwelling woodland birds like this.

From the photo above you might think that it looks alive, if rather stunned, indeed, that was my first thought. Sadly though, it soon became apparent that despite its immaculate condition, the bird was deceased: 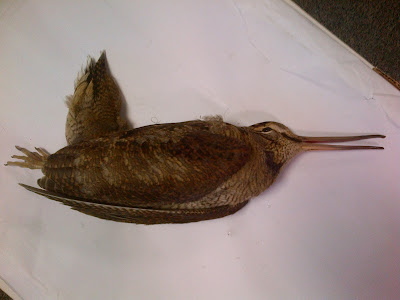 There are several remarkable things about this find, not least the location - it was one of my colleagues who spotted it on the pavement at the junction of Union Street and Blackfriars Road, opposite Southwark tube station. Secondly, that it somehow managed to survive the pounding feet of morning rush hour or the attention of the local foxes. As an aside, I wonder if any of those hundreds of commuters noticed it as they passed by and thought it a strange bird among the scuttling pigeons. And would an 'urban' fox know what to do with this anyway, it not being wrapped in a Tesco bag after all...

Unfortunately it didn't manage to survive what I assume was a collision with a nearby building in the early hours, the most likely culprit being the unappealing glass block where TFL spend their days drinking tea.

Several colleagues came to look at the bird as it sat by my desk with wide eyes and bill-agape, as if it was about to say something. It's not everyday you get to see a Woodcock this close, in fact it's normally a whirring silhouette or arse-end at best, preceded by a heart-stopping thup! as they flush from cover amidst damp, shady leaf litter. In the hand and out of context certain features stood out, I noted the subtle barring on its breast and the shape of its feet. So what was this bird doing in the concrete jungle of SE1 in November?

As this BTO Birdtrack chart shows, whilst being resident in the UK, woodcocks are more typically recorded during the winter months with peaks from late October through to mid January and again for roding male birds through April. Resident bird numbers are boosted by continental arrivals from the east and I wonder if this was such a bird, migrating over London to a rich and sheltered wintering ground somewhere before it's journey was cut short. Woodcock are known to be great travellers, often arriving in numbers and flying through the night (these incredible journeys were once thought to be the means by which tiny goldcrests would appear in greater numbers on the east coast during autumn - so-called 'woodcock pilots') Migration is tactically a great risk for any species but as ever, this has shown the perils that many migrating birds face in heavily built up areas like London.

There is a positive end to the story of this Woodcock though.

For such a beautiful specimen I was keen that it not be wasted and the obvious answer was a taxidermist. Although several calls failed to get a response from any likely parties, the photo was spotted on twitter by Richard Jones (aka @bugmanjones) who alerted Paolo Viscardi, a curator from the Horniman Museum in Forest Hill. A twitter exchange later and the bird is now residing in a freezer before being added to the museum’s extensive taxidermy collection or being used as a skeletal reference piece. Either way, it’s nice to think that from a sad demise, it may end up inspiring the next generation of south London birders and citizen scientists.

Many thanks to Richard Jones, Paolo Viscardi, Julie Cox and David Allen.
Posted by Peter at 23:15